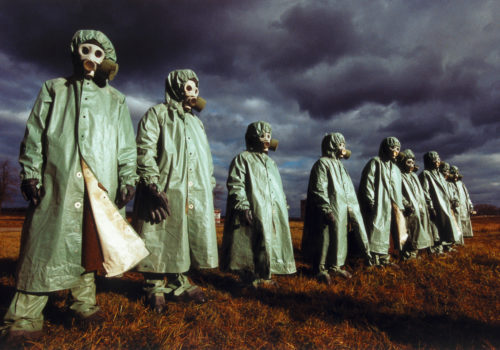 This year, with its Dr. Erich Salomon Award, the German Photographic Society (DGPh) distinguishes German photographer Hans-Jürgen Burkard. The award represents the Association’s tribute to an outstanding and creative visual journalist and to his impressive work as a magazine and reportage photographer that spanned approximately five decades.

His most important works, consistently the outcome of intense collaboration with the relevant text authors and of in-depth research and examination of the topic at hand, cast light on predominantly societal upheavals and human destinies tangled up in them.

Hans-Jürgen Burkard, born in Lahnstein in 1952, studied Visual Communication with the emphasis on photography at the University of Applied Sciences and Arts in Dortmund from 1975 until 1981. Even during his studies, he produced reportages for GEO and Stern. For about 10 years – until 1989 – he worked exclusively for GEO; subsequently, he moved to Stern as a “freelance contractor” and become one of the first accredited Western photographers in the former Soviet Union.

Burkard’s photoreportages from that period, such as “Die Mafia”, the “Rote Armee”, “Stalins lange Schatten”, “In Siberien”, “Moloch Moskau”, “Szene Moskau”, “Religion in Russland”, “die Kreml-Connection” and many more, provided insights into that country’s taboo areas which were unprecedented up to that point. The turbulent times in the Soviet Union are a focus of his work, with the result that Russia, as Hans-Jürgen Burkard says, became a “second home” to him.

His stated aim is to “reach as wide an audience as possible” with his work, his photographs are not just taken “for elites”. His visual vocabulary, mostly wide-angle in the midst of events, in colour and, content-wise, straight to the point, must also be clearly legible for “normal beholders”, he says.

Burkard’s reportage work has been distinguished with internationally renowned awards, including the World Press Photo Award (1991 and 1992) and the Infinity Award of Journalism of the ICP International Center of Photography, New York (1994). His reportages have been reproduced in all the world’s major magazines. Hans-Jürgen Burkard has been a member of the DGPh since 2012.

His final and current long-term project is dedicated to his homeland and has afforded him a new approach: “An Tagen wie diesen” combines song lyrics by younger German singers and groups with associative photographs to draw a photographic portrait of German states and sensitivities. The book of the same title was published at Edition Lammerhuber in 2020.

The award ceremony will take place in Hamburg in September.

The Dr. Erich Salomon Award of the German Photographic Society has been handed out in order to distinguish “exemplary application of photography in journalism” since 1971 – this year sees its fiftieth edition. At the same time, it serves as a memorial to the great photographer of the Weimar Republic, Dr. Erich Salomon, to whom modern photojournalism owes a debt for powerful input and inspiration. The award consists of a certificate paired with a Leica camera and is handed out annually. Award-winners are print media, organizations and television creatives, as well as personalities who have rendered outstanding services to photography in journalism or garnered outstanding achievements in press photography. They have included STERN (1971), Robert Frank (1985), Barbara Klemm (1989), Reporters sans Frontières (2002), Letizia Battaglia (2007), Josef Koudelka (2015) or Chris Killip (2020).