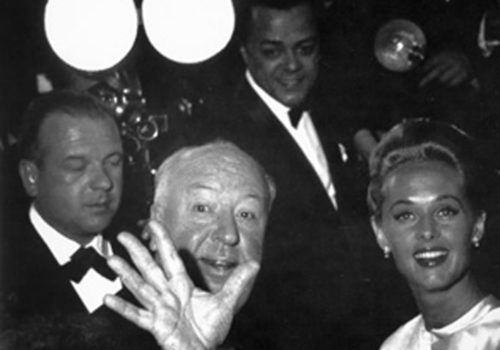 Willy Rizzo chose to present in his gallery this month some spontaneous moments of stars made during the past years.Willy Rizzo started his career in Paris where he photographed stars and starlets for Ciné Mondial, Point de vue and Image du monde. He even covered the Trial of Nuremberg and accomplished big reports, notably in Tunisia on the « line Mareth ».

In 1947, the English Blackstar agency sended him to the United States « to photograph what surprised him »: of a $1 machine which distributed low nylons in drive-in in cinemas. But he prefered women, fashion and started a new life in Los angeles.

Max Corre, with whom he had collaborated in France Dimanche, called him to announce that Jean Prouvost was creating a big magazine in Paris, he came back and met Hervé Mille. Here is the beginning of Paris Match adventure. and is still lasting. His report on Maria Callas inspired Hergé in « Les bijoux de la Castafiore » by creating his caratere : The Paris Flash photographer, Waler Rizzoto, as for his friend Walter Carone.

In 1959, he became the artistic director of Marie Claire and collaborated with the biggest fashion magazines like Vogue, where Alex Liberman asked him to work « with his look ».

In 1968, he married Elsa Martinelli. The have lived in Rome and Willy began his job of designer for his personal needs. According to him, « the Scandinavian or old pieces of furniture were not either comfortable or rather simple ».
In front of request, he created his workshops. But at the end of the seventies, the fall of Cinecitta and the rise of terrorism gave an end in his Roman life. The « dolce vita » was over. Willy sold his business and because of his nostalgie, he came back to Paris.

Today he continues to draw and still photographs the prettiest women of the world, of whom his wife, Dominique, who gave him three children. Grand son of a Neapolitan magistrate, his passion for photography began very early. From the age of 12, in the Italian college of Sédillot street in Paris, he makes portraits of his schoolmates with the AgfaBox that his loved mother gave him.

Willy Rizzo is one of the few photographers who was 20 years old during the Occupation. In 1944, still a teenager, he bought his first Rolleiflex in black market and met a wonderful unknown photographer, Gaston Paris, who became his idol. He once said to him: « when you take a picture, just try and think that you make Fragonard! But in some cases, shoot and think after.» As he rides his bike to the studios of Billancourt, Joinville or the Buttes Chaumont, he photographs stars of the French cinema. Later, those same stars will only talk about him. He is hired in Point de Vue where he learns the job of reporter. He goes to Tunisia in order to photograph tanks burned on battlefields.

There, he makes his shots during the sunset to have a low and different light. The results is spectacular and Life Magazine buys his report. After the war, Willy is recruited by the weekly « France Dimanche », headed by Max Corre, a success photographer specialized in private life of celebrities. Willy is sent to Cannes to cover the first Festival without expenses limitation. Because of his brilliant skills, he is the only one who has photographed many people : princesses, playboys, starlets and stars in front of his lens Zeiss Sonnar 180. Later on, America attracts him. He first leaves with the agency Blackstar to New York where his life is according to the rhythm of the city, in particulary when he meets with Edith Piaf while she was singing at the Versailles or his friends at El Morocco.

He looks carefully at pictures of Richard Avedon, Erwin Blumenfeld. He discovers still mythical California and suceeds in many reports on stars: Gregory Peck, Richard Widmark, Gary Cooper, Ann Baxter… that are very well sold. When he comes back in France in 1949, Jean Prouvost is creating a new great magazine in colours : Paris Match. Gifted, charmer, plated, Willy Rizzo gets dressed with the best suits, drives sports cars, surround himself with gorgeous women.

This big Lord surrounded of “beautiful people” affords all extravagances. He succeeded in transforming the picture of the photographer street acrobat blocked by a bric-à-brac of heavy equipment in figure smart and full of humour. Willy signs Paris-Match very first colored cover with Winston Churchill. A new aristocracy of photographers is emerging around this merry band of boys, young and first romantic daredevils who like distinctive sign of their nobility only Leica, brandished like a trophy.

Christian Dior, in expert, said that the Paris-Match in rue Pierre-Charron was “the most beautiful car in Paris.” For twenty years, Willy Rizzo will feature hundreds of charm and style with the same control and this constantly renewed invention that characterizes the great press photographer. “Our business is a perpetual challenge,” said Willy Rizzo. “When an hour with a celebrity, talent must be immediately delivered. We must find an immediate idea, accessory, which brings together the personality, such as lenses to photograph Dali or a turntable for Marlene Dietrich. I have great admiration for people like Doisneau or Cartier-Bresson, but they have the leisure to wait for hours or days the magic moment. With fashion and the stars is different. This is not the same job!”