Wildlife at the Gadcollection Gallery 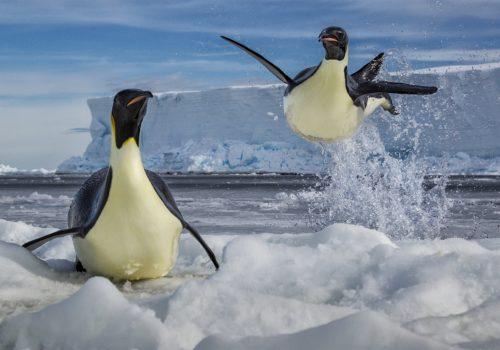 Travellers, citizens and artists: a new generation of photographers is renewing the genre and creating a committed wildlife photography that is in tune with current issues.

Wildlife photography has lived and evolved with the photographic process. As early as the end of the 19th century, chronophotography offered a means of breaking down the galloping of horses and the flight of birds, to better understand them and to photograph them from every angle. At the turn of the 20th century, the reduction in camera size allowed photographers to take their equipment with them and document the life and beauty of nature in all corners of the world. And today, their descendants are immersed in all photographic processes and movements (portrait, landscape, documentary or reportage photography) to continue to help us discover wildlife.

Between power and fragility

Wildlife photography requires great patience, perseverance and a real gift for capturing the psychology of animals in order to amaze, but also to raise awareness. In the GADCOLLECTION gallery, four photographers represent this new generation of travellers and committed photographers who are committed to showing the beauty, tenderness, wisdom and power of the animal world, but also its vulnerability. The photographs of Stéphane Aisenberg, Stephen Wilkes, Kyriakos Kaziras and Paul Nicklen reveal both the strength of these animals and the fragility of their habitat, the beauty of these spaces and the threats to them, illustrating, for example, the impact of melting ice on the natural habitat of polar animals.

Getting up close or standing back

Through his lens, the Franco-Greek photographer Kyriakos Kaziras immortalises the inhabitants of the African savannahs: rhinoceroses, giraffes, lions and elephants are depicted in majesty, in the middle of their natural habitat. In his pictures, the closer Kyriakos Kaziras gets to the animal, the more he manages to translate a variety of emotions to show the individuality of the animal, between tenderness and splendour.

Stéphane Aisenberg, on the other hand, gets even closer to the animal and confronts its gaze with ours, making us glimpse how much closer man and animal are than we imagine. Stéphane Aisenberg is a passionate defender of nature and uses the funds raised from the sale of his wildlife photographs to protect wildlife-friendly lifestyles.

For his part, Stephen Wilkes chooses to stand back and create grandiose landscapes, among which are immortalized groups, packs and crowds of animals. In order to create his Day to Night series, he stays in one place for up to 24 hours, then selects several hundred photographs and combines them into a series of frescoes.

Photographer and biologist Paul Nicklen has specialised in the polar regions, documenting their beauty and evolution for over twenty years. In extreme conditions, he reveals sensitive imagery of animals in their environment, in their daily lives. Founder of SeaLegacy, which has brought ocean conservation to the world stage through the power of visual storytelling, he also collaborates with scientists, filmmakers and environmental activists to inspire action on climate change.

This panorama of photographers offered by the GADCOLLECTION gallery demonstrates that, from near or far, in colour or black and white, wildlife photography is a genre that can be both artistic and inscribed in today’s world.