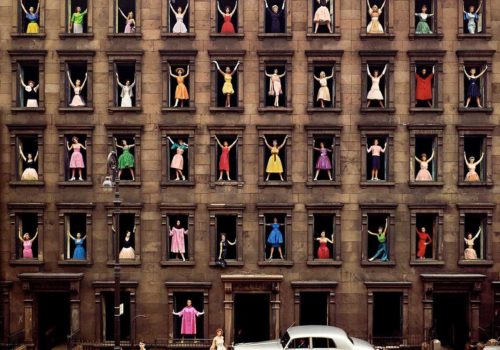 Once considered a niche market, fashion photography is now considered an internationally recognised art form in its own right.

As a photographic genre devoted to clothing and clothing style, the history of fashion photography is inextricably linked to that of the women’s press. Although the first fashion photographs officially appeared in the 19th century, advertising posters and specialised magazines – such as Vogue – still preferred fashion illustrations. It was not until the 20th century that sketches gradually gave way to fashion photography in specialised magazines. Most often, the images show haute-couture or ready-to-wear pieces. Two trends then emerged: on the one hand, the studio portrait, and on the other, photographs taken on location, in the street or in busy venues (restaurants, clubs, etc.).

From the 1950s onwards, several fashion photographers began to make a name for themselves, such as Richard Avedon, Guy Bourdin and Douglas Kirkland, who were soon joined by others: Sarah Moon, Ormond Gigli, Jean-Daniel Lorieux….

Such was the boom that fashion photography took a different turn in the 1970s and 1980s. From then on, its vocation was no longer solely commercial. Fashion photographers, following the example of Helmut Newton, anchored the genre in an assumed artistic approach, seeking to capture an atmosphere and a real aesthetic

Gradually elevated to the status of a work of art, fashion photography is entering museums and contemporary art galleries: Guy Bourdin at the Jeu de Paume, Sarah Moon at the Musée d’Art Moderne in Paris, Peter Lindbergh and Richard Avedon at Gagosian, Irving Penn at Thaddaeus Ropac… A craze that is also spreading to the auction rooms, where prices are soaring. Among the transactions that made a splash, the iconic Vogue cover featuring model Jean Patchett sold for $481,000 at Christie’s in 2011 (compared to $28,000 in 1999), Peter Lindbergh’s photograph of 8 Supermodels for Vogue sold for €187,500 at Christie’s in 2019, and, again at Christie’s, Richard Avedon’s “Dovima and the Elephants” sold for $1.8 million in 2020. A record. Models are becoming a prerequisite in the composition of a fashion photograph, increasing their value considerably.

Among the great names in fashion photography are Ormond Gigli, Douglas Kirkland and Jean-Daniel Lorieux, represented by the GADCOLLECTION Gallery, one of the best photography galleries in Europe, and all three are known for their assertive style, which  became a real signature over time.

Ormond Gigli was an American photographer who died in 2019 at the age of 94. A graduate of the School of Modern Photography, his career took off in 1952, when a LIFE editor hired him to shoot a series of portraits to replace Robert Capa. Covering the Paris fashion shows, Ormond Gigli made a name for himself worldwide thanks to his studied staging and timeless style. The author of one of the world’s most famous fashion photographs – Girls in the Windows, New York, 1960 and Other Stories – he left an extraordinary photographic legacy.

A Canadian photographer, Douglas Kirkland began his career as an assistant to Irving Penn before working on the editorial staff of LOOK magazine. In 1961, he photographed Elizabeth Taylor and then Marilyn Monroe, which propelled his career as a fashion photographer. Immortalizing models as well as Hollywood stars, Douglas Kirkland likes to work in the studio and on film sets, always with a common thread, portraits with an intimate atmosphere and raw emotion.