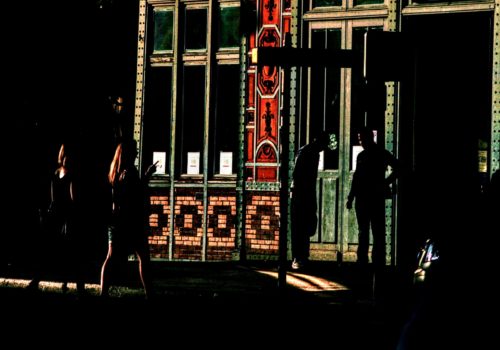 Indissociable from the history of photography,”street photography” has been a genre in its own right since its beginnings. It still seduces amateurs, artists, collectors and gallery owners. A genre well-defended by the gallery GADCOLLECTION in Paris.

With the practice of the open-air studio for painters during the 19th century (Barbizon school, impressionists…), the artist got used to represent the immediate motif he had in front of him. When photography appeared, a painting of the street in big cities naturally took place, with the daily wandering of the streams of passers-by, the feeling of depersonalization at work in the metropolis or the beauty emerging from a certain chaos.

As early as 1877, the British photographer John Thomson, accustomed to field photography during his travels in Asia, took portraits of the inhabitants of London, focusing in particular on small trades such as children shining shoes or itinerant fruit and vegetable sellers. He published these photographs under the name Street Life in London. In France, a few years later, Eugene Atget made a picture of old Paris, also a portrait of the small jobs workers, in a solitary and mysterious quest, accentuating the interest of artists for street photography.

The American Berenice Abbott, who discovered the work of the latter alongside Man Ray, was inspired. She herself showed prints to the young Walker Evans who was shocked. He would later say that Eugène Atget was his great source of inspiration, he would also become a very important street photographer.

The “street photo” was born, with a particularly American expansion afterwards, a corollary of the advent of big cities, with streets life, what happens there, between children’s games and chance encounters. This is what we can see with the very elegant black and white photographs of George Tice, represented by the GADCOLLECTION gallery. These toddlers walking on a huge road in the Great American Plains, with a typical farmers’ straw hat on their heads and the overalls that go with it… Other photographs that emerge like an American myth: this drive-in that evokes the frightening silence of an Edward Hopper painting or the huge eagle’s head perched on top of the Chrysler building in New York that seems to split the air.

Many street photographers have plunged into the arteries of New York City and have become photographic legends: Paul Strand, Robert Frank, Helen Levitt for example. In the 2000s, the photographer and poet Alice Attie, also supported by the GADCOLLECTION gallery, produced a magnificent series on a Harlem neighborhood. She manages to capture the mood of a sweet melancholy, portraying the inhabitants who willingly offer themselves to her lens, the walls behind them – red bricks or covered with graffiti – giving the universe of the city present in her work.

Another urban poetry that will remain in the history of street photography: the subtle shots of Saul Leiter. The latter realized sublime urban paintings diluted by rainwater or the evanescence of a trace of mist on a window, offering a new clarity to our eyes tired of the asphalt.

The French photographer Éric Houdoyer is inspired by master Leiter’s photographs and literally plays with light, which he seems to see as a singular element of enhancement, tracking here the effect of the reflection of a car window or the beauty of an anonymous profile behind the front of a café. His photographs can remind us of a succession of shots from a detective film where, like the aesthetics of director Todd Haynes, the photographer tracks down a certain softness in an ambient darkness.

It would take too long to list all the street photographers, but let’s note that this genre of photography has only gained in power and will go so far as to be the trademark of certain associations of photographers, galleries or agencies, such as Magnum founded by Henri Cartier-Bresson and Robert Capa, Today, street photo works such as those of Raymond Depardon, Miguel Rio Branco or Khalik Allah, the work of the latter even qualified as “street opera” for the beauty of the very expressive faces of the passers-by at night illuminated by the city.

It should be noted that some photographers like to give a more general and anonymous aspect to the immensity of the metropolis, choosing rather than the detailed portrait, a certain general view, thus trying to make us feel the abysmal aspect of the great city, its construction in the form of a human anthill. Stephen Wilkes, born in 1957, creates breathtaking views of emblematic places, such as the Sacré-Cœur in Paris or Trafalgar Square in London. He combines on the same image a whole series of photographs taken on the same day and shows how much our urban spaces are inhabited, populated by a dazzling animation, as it is particularly the case in Times Square where the famous yellow cabs look like a golden river that never stops flowing.

www.gadcollection.com
Tuesday to Friday, from 2 pm to 7 pm
Saturday and Sunday, from 2:30 pm to 7 pm