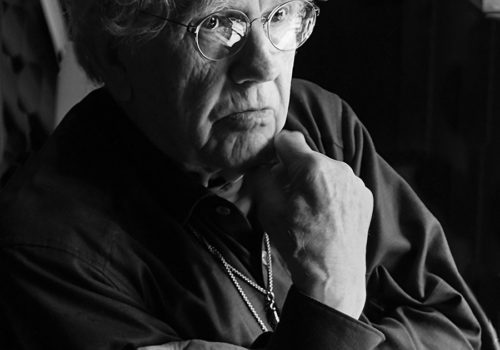 René Groebli (born in Zurich, Switzerland in 1927) counts among the most iconic and innovative photographers of our time. On top of that, he remains active in organizing his own exhibitions at the age of 93! His series of images published in 1949, MAGIE DER SCHIENE (RAIL MAGIC) he secured himself a place among the elite of Swiss post-war photographers. In the early 1950s, Groebli worked as photojournalist for Life, Picture Post, and other international magazines and later opened a studio for industrial and commercial photography. In the early 1980s, he stopped working in advertising and rediscovered for himself the possibilities of expression that black & white photography offers.

Now, at CHAUSSEE 36, a space for photography in Berlin, his breathtaking color photographs are on view in his solo exhibition, Farbzauberer / Master of Color, until 23 January 2021.

Beautiful and iconic, the black and white photographs of René Groebli caught my eye long ago, and his current exhibition gave me an excuse to contact him to learn more about his life, his work, and how everything came together.

Nadine Dinter : Most people know you for your series, The Eye of Love, which you produced in 1952 during your honeymoon. But you started out much earlier. What moment marked the start of your lifelong passion for photography?

René Groebli : In 1943 my father bought a Rolleiflex, but unfortunately, he did not really have an idea of the effects of aperture, shutter speed, and film speed on photographic results. To help him understand, I studied the matter and started systematically to take pictures to demonstrate various results. This fascinated me to such a degree that I quit school prematurely and started professional photographic training in 1944.

ND : The Eye of Love was created during a time when nude photography was not as acceptable as it is now. How did the stigma of nudity back then affect how you publicized the series and the public response?

RG : At the time, my wife Rita and I were in art school, so we approached nudity in the context of art. For me this series was a photographic love poem, dedicated to my wife. Some of the public reduced the poem to the exhibition of nudity only and reacted with shock.

ND : One of your earlier works is titled Magie der Schiene / Rail Magic, a selection of dynamic, black & white photographs taken in London, Paris, and Basel in 1949. How did you come up with the concept for this series?

RG : I traveled a number of times to Paris on the night train, and was emotionally touched by the noise, the smells, the rushing clouds of vapor produced by the monstrous machinery on the iron tracks. This fascination met with my desire to explicitly incorporate motion into still photography. So I started taking pictures in railway stations in and around Paris. The rare permission to travel and photograph on an express train’s engine from Paris to Basel was the highlight of the project.

ND : As for many renowned photographers, Paris has been a setting for many of your brilliant images – depicting painters along the Seine, people sitting at the legendary Café de Flore, men in a park, deep in discussion. Did you ever see yourself as a street photographer?

RG : I never saw myself as a street photographer, because the locations were consciously chosen and the pictures mostly carefully composed.

ND : When looking at your work, it seems that you have never limited yourself to just one subject matter. What draws you to this multifaceted perspective?

RG : My strong desire to explore and exploit the new, and thereby push frontiers.

ND : At some point, you switched from black & white photography to color. What was the tipping point?

RG : Advertising demanded color. So I experimented with various techniques to express my personal visions in controlling color through specific manipulations. My aim was to achieve more than mere documentation.

ND : Your current exhibition at CHAUSSEE 36 is called Farbzauberer / Master of Color. What’s the story behind this title?

RG : In 1957, the American Color Annual Magazine honored me as a “Master of Color”.

ND : Which has brought you more creative satisfaction: your independent, artistic work or your commissioned work for major companies such as General Motors?

RG : I was able to express my artistic ideals in commissioned work and, vice versa, to transfer the technical experience I gained through them to my independent artistic work. Both brought me full satisfaction.

ND : In your color photography, you have experimented with various techniques – from dye transfer to using semi-transparent mirrors and special lighting. Which technique surprised you or do you enjoy the most?

RG : I have used various techniques to visualize my ideas of personal expression. I enjoy the one that best serves my specific aim.

ND : What’s your advice for the new generation of photographers who are trying to make a living with their images?

RG : Don’t try to copy. Stick to the call of your heart, and work, work hard, and become and stay self-critical.

ND : Thank you, Mr. Groebli for the wonderful insight and inspiration!