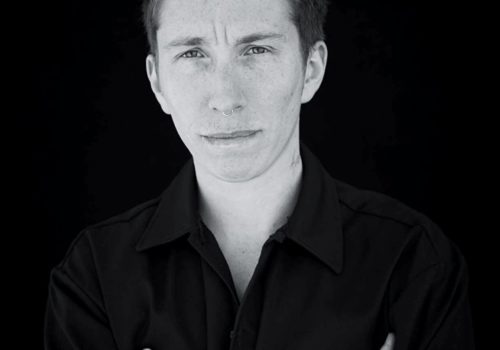 iO TILLETT WRIGHT is an artist, author, activist, and storyteller. He is the creator and host of the hit podcast The Ballad of Billy Balls, the author of Darling Days: A Memoir, and a co-host of the MTV show Catfish. In 2010, iO Tillett Wright embarked on a 10-year journey across the United States to photograph 10,000 people who identify as queer to showcase the full spectrum of sexuality and gender, taking an inclusive approach in the representation of race, ethnicity, age, profession, and class. His book, Self Evident Truths: 10,000 Portraits of Queer America, published in September 2020 by Prestel Verlag, features portraits of nurses, truckers, doctors, lawyers, au pairs, chefs, cab drivers, activists, and professors, alongside US Senator Tammy Baldwin, athlete Megan Rapinoe, actor Zoe Kravitz, and conceptual artist Terence Koh. Designed with the work of Bernd and Hilla Becher in mind, embracing the equalizing impact of the grid format, these simple, straightforward images are sequenced chronologically in an arrangement that best represents the idea of equality.

Being a huge Richard Avedon admirer, who served as one source of inspiration to iO Tillett Wright, we were drawn to this book and decided to find out “what’s new” with this inspirational artist and his monumental project.

Nadine Dinter : 10,000 portraits, 10 years of traveling through the US, photographing people in 90 cities of all 50 states – did you imagine that your project would take on such a scale when you first came up with the idea?

iO Tillett Wright : I knew that this would be an enormous undertaking because I knew there was a vast and limitless community identifying as anything other than 100% straight. The scale of response in participation and vulnerability is what is ever awe-inspiring.

ND : Your aim was to photograph queer people, representing the full spectrum in terms of race, ethnicity, age, profession, and class. How did you find the people you portrayed? Did you make use of a particular network, did you engage scouts or have friends in each city, or was there even an official call-to-action?

iOTW : We made an open-call to anyone who identified as something other than 100% straight or cis, and there was a huge response.

ND : Among those portrayed were also many famous artists, such as the athlete Megan Rapinoe, actors Zoë Kravitz and Lena Dunham, models Adwoa Aboah, Yves, and Cara Delevingne, artists Catherine Opie and Terence Koh, and musicians Azealia Banks and DJ Venus X. Did you have less time with them? Did you have to approach them differently or was it clear that they would participate in this project?

iOTW : All participants, regardless of social status, had the same process and amount of time getting photographed. And no one was photographed on this project without total clarity as to what it was.

ND : Your book Self-Evident Truths was published in September 2020; how did it feel to finally hold it in your hands? What are some of the reactions to the book by your family, friends, and the public?

iOTW : It was incredible. It made all the many many times I thought of giving up worth pushing through. This is an object that will live forever.

ND : What are your plans to continue this project? Do you have any upcoming book presentations or talks to broaden attention to this “self-evident truth”?

iOTW : Not at the moment. COVID sadly killed out final exhibition plans ahead of the election.

ND : What are your recommendations to aspiring artists wishing to embark on a similarly long-term project?

iOTW : When I started this project I had no idea how long it would take or how many people it would encompass. Or even clarity on why I had to do it. I just knew that I had to contribute whatever I could to an injustice that I saw. My father, who at the time was my creative collaborator and mentor, tried to talk me out of this project. He told me it wasn’t a poignant approach. I am proud to say he was wrong. As many people will be when they tell you not to embark on arduous complicated, and nebulous endeavors in the interest of what many will call naive goals. My advice is to do it anyway.

Thank you, iO Tillett Wright for this great interview!