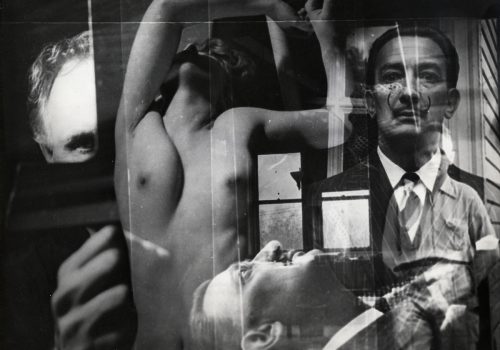 These are a selection of Val Telberg‘s montages made between 1948 and 1956….each unique.  His technique was to print through layered negatives, often realigning them after an exposure to make variants…and…what adds another dimension I have never seen in any one else’s work, he would make the exposure through a sandwich of negatives, then while developing the print in the tray, he put the wet print back under the enlarger and made a second exposure on the same sheet of paper, which created a space that was totally confusing, and sort of solarizing the print as well.  His goal… to depict stream of consciousness, fluid, overlapping, ever changing.  He was featured in SUBJEKTIVE FOTOGRAFIE at Museum Folkwang and travelling, in the mid-1980’s.

When Anaïs Nin republished her House of Incest in 1958, she incorporated the surrealistic photomontages of the artist Val Telberg. The collaboration became well-known, as all subsequent editions of the book contained his work, including Nin’s own image within the photomontages.

Val Telberg was born in Moscow in 1910 to Finnish parents and was brought up in China. He moved to New York in 1938 and was introduced to surrealism while working as a photographer, thus sparking his interest in photomontage.

A remembrance of Telberg and Nin’s association by Gunther Stuhlmann appeared in Volume 14 of his ANAIS: An International Journal (1996):

In the summer of 1958, while travelling in Europe, Anais Nin sent an enthusiastic note to her friend Vladimir Telberg von Teleheim, the Russian-born artist-photographer who had been experimenting for some time with photographic images to enhance a planned re-issue of her House of Incest, which had been out of print for almost a decade. “Dear Val;” she wrote on stationery from the Hotel de Crillon in Paris, “I love the photomontages, the selection, the cover—perfect I feel… It’s wonderful how you have welded the images and the texts. They are poetic in their own terms, in their own language. The feeling of a floating world is so powerful.”

Their project had been part of Anais Nin’s determined effort in the late 1950s to republish and distribute once again her own books. She had discovered that a new offset process enabled a Chicago printer, Edward Brothers, to reproduce at reasonable cost the pages of her own hand-set and hand-printed 1947 Gemor Press edition of House of Incest (and those of other titles) directly from the original. Val Telberg, who then made his living on Sixth Avenue in New York as a dealer in maps, atlases, and scholarly books on Eastern Europe and Asia, was an experienced bookman. But it was Telberg the artist, who had studied at the Art Students League, the experimental filmmaker and inventive photographer, whom Anais Nin invited to collaborate with her. “I like so much what you are doing,” she had written to him initially, after seeing some of the images he had begun to create in the 1940s. She had given him a free reign and set no deadline. “When your dummy is ready, your cover photo, etc., then you can send it to me.”

When the first  1,000 paperbound copies of the re-born House of Incest finally appeared, they featured, in front and back, one of Telberg’s subtly imagined montages, which seemed a perfect summary visualization of Anais Nin’s poetic text: A partly obscured female head and partial, nude body, with arms raised, appeared to rise into a sea of shimmering clouds overspreading the shadowy outlines of roofs and, in the left bottom corner, the light-framed silhouette of what might be an ornamental bedstead or the fragment of a metal fence. (“Ghosts of past defeats flaunting forgotten wounds and imagined dreams,” reads one of Telberg’s worknotes, “…and the sudden burst from under water up to sky.”) Of the hundreds of prints composed by Telberg on his light table by manipulating layers of negatives of photos taken of people and objects in the “real” world, only nine appeared in the finished book. Some of these “unreal,” dreamlike, spatial compositions incorporated floating images of the real Anais Nin, and one of the photomontages reveals a partial view of the artist’s face with one dark-rimmed demonic eye, enmeshed in a cubist swirl of hands and hair juxtaposed against the massive slice of a brick wall.

Val Telberg missed some of these celebratory events, and the first copies of the new House if Incest became available only a few days after his death, at the age of eighty-five, in April 1995.