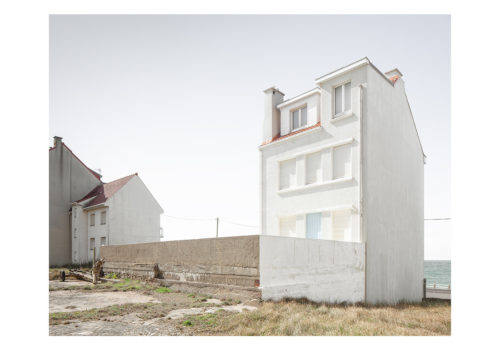 Borderline is the latest work of the Belgian artist Paul D’Haese. This photographic series has been carried out during hiking trips along the northern French coast. Paul D’Haese focused on the border between the built-up landscape and the wide sea.

The northern French coast is marked by history: the Atlantic Wall, the liberation, the refugee camps. With this in mind, the artist has investigated all kinds of interactions in a non-documentary way: the ones between land and sea, solid and turbid, intern and extern, locked up and liberated.

Paul D’Haese linked these themes to the search for identity, with the “borderline” personality disorder as the extreme case. Five years ago, he conceived, for the first time, the idea of exploring this boundary line. Since then, he has been following a route, about 350 km as the crow flies, from Bray-Dunes to Le Havre. He has crossed about fifty villages and towns, with his camera, first by car, then by bicycle, and finally on foot, creating a body of 169 photographs.

Born in 1970 in Ouagadougou, Burkina Faso. Lives and works in Paris. After a degree in sociology and visual arts, Vincent Fournier graduated from the Ecole nationale supérieure de la photographie (ENSP) in Arles in 1997. He explores, with photography but also other mixed media, the various mythologies of the future: the space adventure, the utopian architectures, the artificial intelligence and the transformation of the living. His works are part of several collections, including the Metropolitan Museum of Art (MET) in New York, the Centre Georges Pompidou in Paris, the MAST Foundation in Bologna…

In 2021 she presented her series “Suillus, looking at the sun with closed eyelids” at Hangar during the 5th edition of the PhotoBrussels Festival, and released her artist’s book of the same series. Fascinated by the metamorphoses, silent realities, and beauty of the toxic landscape round the old zinc factory of Lommel, this micro-ecosystem plays a natural role in Alice Pallot’s artistic process. She questions the impact that humans have on nature and the beneficial effects that lockdown has had on the environment. Her immersive and captivating work bears testimony to spontaneous exploration and offers a message of hope. The images are taken from sunrise to sunset, making the series chronological, blurring the boundaries between reality and phantasmagoria.”

Brinkmann´s (°Germany) photographic self-portraits turn a classic genre upside down. In general, the work of artist Thorsten Brinkmann is initiated by the things he finds: objects discarded by the civilisation, which he finds in bulk waste collections in the street, but also ordinary things like bottles, flower pots or shelves. Even his own body becomes an objet trouvé for the artist. Brinkmann is a juggler who uses different worldly objects on an equal level, introducing them into art in the manner of Duchamps. In his latest work the artist is standing – surrounded by seemingly trivial objects, which all, however, point to the artistic context by the way they are presented – in the centre of a series of photographic self-portraits. The creator in the focus of his own eye is a topic which asserted itself as a distinct form of art in the Renaissance when artists developed the necessary self-assurance to depart from their status as nameless craftsmen. Many are the self-portraits which have been created since – Dürer´s self-portrait showing him in a fur coat, from 1500, and Velazquez´ legendary presentation of himself in Las Meninas of 1656 are particularly fine examples of this phenomenon.

Julie Cockburn works with found images and objects, transforming them into new works of art.  Using her own personal visual language, Cockburn embellishes carefully sourced second-hand photographs with embroidery, collage, screen printing and painting to produce her ongoing series of portraits and landscapes. Having trained as a sculptor, each composition plays a key role in the original photographs that Cockburn chooses. In addition, colour, texture and inherent meaning are fundamental to the decisions she makes when executing her transformations. Cockburn’s whole practice has a meditative quality apparent in the attention to detail and meticulous needlework in her embroidered works.

Noé Sendas (b. Brussels), lives and works in Berlin, Madrid and Lisboa. Sendas began presenting his work in the late Nineties. Explicit and implicit references to artists and literary, cinematic or musical creations are part of his raw materials. Specific concerns about the reflection and practise of visual arts can also be added to his repertoire. These include: the body, as an entity that is simultaneously theoretical and material; the observer’s perception mechanisms; or the discursive potential of exhibition methods. His notable Crystal Girls deconstructs film stills from Hollywood golden age, eliminating faces, limbs and settings, creating enigmatic sophisticated still lives.

Since 2014 I have walked along the Danube river. From its mouth at the Black Sea, I followed the river via Moldova, Ukraine and Romania, up along the edge of Bulgaria and into Serbia.

When I look at the river, I see a stream of thoughts. And when I visualise my thoughts, I picture leaves flowing down the river. Picking up a leaf or flower from the river and separating it from their environment leads to a change in perception. They become precious relics that once were merely nature’s debris. This reflective process of selecting thoughts to cherish, or letting them flow past and out of sight on the river, is a familiar form of meditation, and a lesson well thought by the ever changing stream of the river.

They show familiar faces hiding in the veins of its leaf. This anthropomorphic personification, creates a rare bond. And once the flower is floating in the circular frame of the microscope and placed against a dark blue background, nature’s rarest pigment, it appears no longer broken, but a conscious design of imperfection. The river’s constant change and its richness of metaphors are celebrating the circulation of life. This force of the river has been my emotional (comforting)- as well as my pragmatic guide on this journey. As Heraclitus said, ‘you can never step in the same river twice’. Thus my photographs of these relics are solely a lasting evidence of the temporary state the river, and I, were once in.

Collage (/kəˈlɑːʒ/, from the French: coller, “to glue” or “to stick together”;[1]) is a technique of art creation, primarily used in the visual arts, but in music too, by which art results from an assemblage of different forms, thus creating a new whole. (Compare with pastiche, which is a “pasting” together.) (according to Wikipedia)

Looking at Gert Motmans’ work, you’ll realize this definition doesn’t cover the load. It’s as if, with his works, Motmans creates a parallel world. His own analogue images are taken out of context and laid next to other, “borrowed” images. Layering and redefining memories. Some memories are of his own making, some are those of others, found in old books, magazines or on vintage postcards. Respectful, as if he is creating a shared history. All this is underlined by certain characteristics. First there is the use of the paper, may it be vintage, torn out of an old book or delicate handcrafted Japanese Bizan or Kozo paper. Then there is the smaller format of the collages, protected by carefully chosen frames, asking the viewer to approach, originating intimacy. His work evokes a new illusive world, where people can rediscover past experiences, or can be reminded of places once visited. The landscapes are undefined, witnessing solitude and therefor can be perceived as disorienting.

Julie van der Vaart has the DNA of the scientist-philosopher-naturalist-explorer. She keeps seeking for different angles on a set of recurrent underlying themes: subjectivity of time, mathematical singularity, vastness of the cosmos, mortality, nature, and thus also the driving force of the universe: eros. But at the heart of the oeuvre of Julie van der Vaart also sits a timid, yet abundant, mystery. In a way, her photography seems to articulate an inner conflict between passion for science and a suppressed feeling for spirituality. This wonderful duality has trickled down in the latter artworks in her analogue oeuvre. Throughout this oeuvre van der Vaart develops form and method to keep up with the requirements of her themes. Science, time, cosmos and spirituality are hence translated in star spangled nudes, esoteric b&w landscapes, timeless caves and silvery silkscreen prints of waterfalls.”