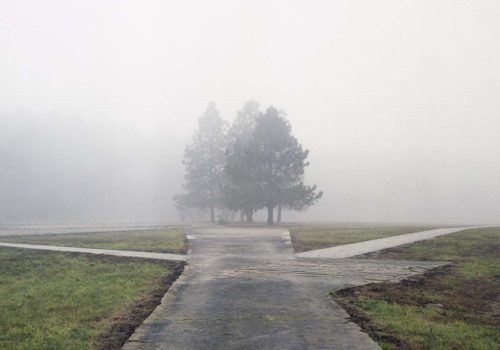 Six years in the making, the latest photobook by Marc Wilson is an extraordinary journey across 20 countries, documenting the physical traces of the Holocaust. Photographed in more than 130 locations, the 360 images are paired with 22 stories from Holocaust survivors and their descendants. A Wounded Landscape brings the past into sharp focus, forcing us to confront the fact that these terrible events happened in our world.

“The Wiener Library has numerous opportunities to see artistic responses to the Holocaust, and I can state unambiguously that Marc’s work is among the finest and most sensitive that we have seen in many years” Ben Barkow, Former Director, The Wiener Holocaust Library

Since May 2015, I have sat for hours listening to Rita, Harry, Lilian and others share their stories with me. I have listened to stories of parents and grandparents, brothers and sisters, sons and daughters. I have listened to stories in English, French, Hebrew, Polish, Dutch and Russian. I have travelled to over 130 locations in 20 countries making ‘A Wounded Landscape – bearing witness to the Holocaust’.

Book production funded through a 174% funded kickstarter campaign with over 500 backers. 650 books pre ordered of print run of 1500.

This will be my third self-published book, after ‘The Last Stand’ and ‘Travelogue 1’.

There are nearly 40,000 sites, in Germany and in countries which the Germans occupied between 1939 and 1945. There, the Nazis and their collaborators systematically murdered nearly six million Jews as well as a huge number of people from other groups considered by the Nazis to be inferior, racially or for ideological or political reasons. These groups included Roma, homosexuals, the mentally and physically disabled, Jehovah’s Witnesses, Communists, and more than three million Soviet prisoners of war.

These sites persist today throughout these countries. Together they formed a pathway to genocide: destroyed communities and ghettos, internment camps, transit camps, labour camps, sub camps, concentration camps, extermination camps and displacement camps. They are connected by the landscapes that surround them, and the forced journeys made between them. At these sites, individual killings and slaughter on a mass scale took place, the numbers involved almost beyond our understanding. These are sites where literal life or death decisions were made, but they are also sites of hope, survival and memory.

“In April 1945 they ordered us out of the camp. There was no train or bus, we were on foot. The Death March. We came to the sea and there were barges.

We waited to die in the sea. A barge with prisoners from Norway, Poland, Greece…After one day and one night we did not know what to do. One man said we must begin to swim. We did not know where we were, which country, which sea, we just wanted to swim so we did. We could die in the sea or we could die on the boat. I had to survive, I had to stay alive because I had to tell, must tell, what happened”.

Marc Wilson : A Wounded Landscape – bearing witness to the Holocaust