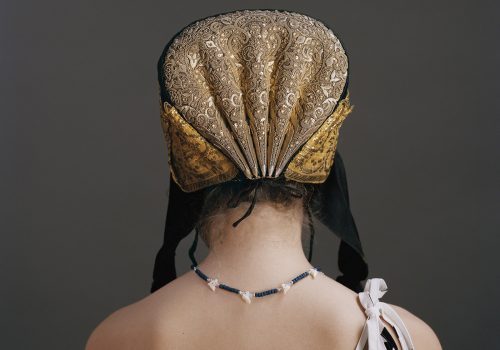 The museum in Le Havre welcomes photographer Trine Søndergaard, one of the major artists of the contemporary Danish scene. This is her first solo show in France and it is part of the “Nordic Lights” event, which has presented since April 2018, and in five prestigious exhibition venues in Normandy, the works of eight contemporary Nordic photographers. Le Havre is the last leg of this journey. The exhibition brings together two of Trine Søndergaard’s recent series, one of which is enriched by the presence of a painting by the Danish painter Vilhelm Hammershøi that the Musée d’Orsay has kindly lent.

Trine Søndergaard has chosen to have two universes interact in the museum. The “Interior” series presents itself as a free path in the corridors of old neglected mansions. While “Guldnakke” is based on a specific device: a girl asked to wear a headdress embroidered with gold belonging to a social tradition rooted in the history of Denmark. On the one hand, the expression of emptiness, abandonment, silence, a composition marked by geometrical preoccupations; on the other, a human presence that fills the image, the glow of a material, a vibration of colors and a symphony of fabrics. If these two series differ in their pattern, the extreme attention paid to the framing and the light brings them together and contributes to the assertion of a style peculiar to the artist.

The historical dimension of the “Guldnakke” series is very important, but through the revisited tradition of these headdresses, Trine Søndergaard also reveals an original appropriation of the portrait genre. In a close and distant relationship with these girls, she portrays the emergence of a body of today under a cloth loaded with symbols; thus crossing present and past, which is at the same time, a diffuse tribute to painting.

“Interior” is an explicit quote from a master of Danish painting, Vilhelm Hammershøi. He built a work around the same pattern of interiors, returning constantly, in the manner of Giorgio Morandi with his still lifes. The words chosen by the historian Georges Banu * to describe Hammershøi’s work could be applied to the “Interior” series: “The interiors are subdued thanks to a monochrome that soothes the differences”. Trine Søndergaard plays on a palette nuanced in gray: the muted colors of the walls are enhanced by the light that lives in the rooms and corridors. Georges Banu also notes the painter’s recurring representation of doors: “Without closing, they follow one another as an invitation to travel within the house. The door a determining element of the composition, doubles up the frame, puts the spaces in perspective.

The artistic project is closely intertwined with the atmosphere that reigns in these interiors and that Trine Søndergaard wants to restore. She is attracted by these spaces from which emanates the impression of a time that has been stopped, putting in form a quest which lives it and is incarnated in the title “Still” which she gave to the exhibition: calm, lack of movement. But she also brings to this word an appeasement which is necessary to her.