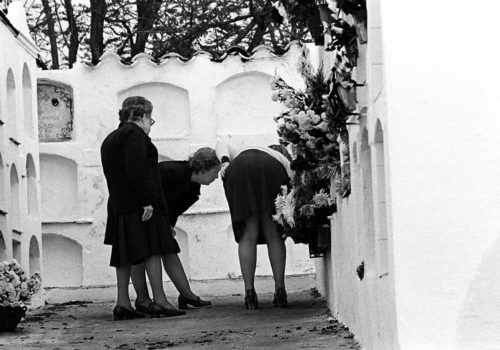 The Rocío Santa Cruz Gallery presents Dona Situació Límit, a practically unpublished exhibition of 32 photographs of Colita, the original vintage copies, printed by the photographer, were first exhibited in 1985 in the Caixa de Barcelona Exhibition Hall, with the collaboration of Barcelona City Council, and under the title: Situation limit of the marginalization of women.

Thirty-seven years later, we have recovered the original 32 editions in an exhibition project that seeks to investigate the contemporary spirit that permeates the entire work of Colita.

The hand program of the exhibition in 1985 included an unpublished text by M. Aurèlia Capmany, councilor for culture of Barcelona City Council at the time, and which we reproduce again:

True, we know this, and they never tire of telling us that illness, old age, low-paying work, loneliness, and death do not belong exclusively to women. Even those who want to deny the evidence remind us that women live longer, that they are stronger, well, that they are more mesmerized and do not realize that this argument further demonstrates the marginalization of women.

Marginalization does not mean more sadness or more infections or more insomnia or more fear of living, it simply means that once on the sidelines where she was placed at birth there is no way to make the leap and be in the right place. way. Living on the sidelines means that life itself does not go down the main road, that it does not lead anywhere, that it depends on another, like a remorse, without the ability to make its own decision, that it depends on the sound they play and that marks the way.

Marginalization is sometimes not noticed, or very little is noticed. Sometimes it seems that the woman has placed herself on the side of the road, skipping the rhythmic pace of the males, well-uniformed, dali dali on the main road, and you would say that they have stood on the sidelines by vocation, by decision, out of laziness, out of mischief, as if to say: Apa, I don’t want to come! If you look closely, you will notice that no one is starving for lack of appetite, and that if you stay there, you will be sick.

That is why, in order to make people understand how distracted women are, thanks to the terrible organization of the social body, they are in a borderline situation, that is, leaning against the wall, it is necessary to get ready to aim and hunt!

To undo the grateful theses, which cradle good consciences, it is necessary to insist on ideas as simple as these: The woman’s natural place is not in the kitchen.
Motherhood is not the only justification of a woman’s life. The woman is not happy selling her work at bargain price.
The woman is not at all satisfied when they rape her!
Women simply want everything: responsibility, decision-making ability, intervention in collective life, the enjoyment of all the gifts of life, risk and fullness. A woman is, first and foremost, a person, and being a female should not invalidate her ability to be a person. And if it is necessary to change the social body for this to be possible, then let us change it.

The validity that, unfortunately, Capmany’s text and Colita’s images still have, force us to reread and look back at what we as a society cannot accept. And that Colita with her gaze transgressed.

A few years earlier, in 1977, Colita collaborated with Capmany on the edition of the first openly feminist graphic book in post-Franco history, Antifémina, which is now virtually impossible to find, as the first edition was immediately hijacked by the structures who still reigned in the midst of the Democratic Transition.

The Colita Fotografia Archive, after more than two years of locating and restoring the negatives, always under the supervision and approval of the photographer Colita, and with the collaboration of the Barcelona City Council, have resumed the natural course of ‘an exceptional book that never had to be interrupted, and they have reissued Antifémina.

The exhibition includes a selection of vintage photographs, author’s prints and current reprinted editions of the Antifémina series, included in the book.

The Rocio Santa Cruz gallery would like to thank Colita, who through her way of looking, generosity and confidence has made us love and respect her work and her person, and especially Francesc Polop, director and soul of the Archive. Colita Photography, without whom this exhibition would not have been possible.

Colita (Barcelona, 1940)
Isabel Steva “Colita” was born in Barcelona in 1940. She met personally and learned from Oriol Maspons, Francesc Català Roca, Xavier Miserachs and Paco Rebés. She specialized first in film photography and then in portraiture, and is considered one of the photographers of the so-called Gauche Divine. In 40 years of profession she has made more than 40 exhibitions and published more than 30 photography books. Her work is part of the collection of the Reina Sofia Museum (Madrid), the National Art Museum of Catalonia (MNAC) (Barcelona) and part of her extensive work is deposited in the National Archive of Catalonia, in the Municipal Archive of Barcelona, the Brossa Foundation and the Film Library of Catalonia. In 1998, Barcelona City Council awarded her the Gold Medal for Artistic Merit, together with photographers Oriol Maspons and Leopoldo Pomès, and in 2004 she was awarded the Creu de Sant Jordi by the Generalitat de Catalunya.

She was also named Doctor Honoris Causa by the Autonomous University of Barcelona in 2012. In 2014 she received the National Photography Award, an award she rejected due to the situation of culture and education in Spain at that time. In 2015 she received the Bartolomé Ros Award for the best Spanish career in photography. The jury, formed by Rosa Ros, responsible for the legacy of Bartolomé Ros; Gervasio Sánchez, photographer; Rafael Doctor Roncero, commissioner; João Fernandes, Deputy Director of the Reina Sofia Museum; and Alberto Anaut, president of PHotoEspaña, wanted to recognize with this award “the coherence of her career, her professional independence and the whole of her work, a testimony of an era, lived from within”. In November 2018 and coinciding with the 40th Anniversary of the Spanish Constitution, the great exhibition The Power of Art was organized in the Senate and Congress (Madrid), where Colita exhibitsed 40 photographs belonging to the collection of the National Museum Center of Art Reina Sofía (MNCARS).