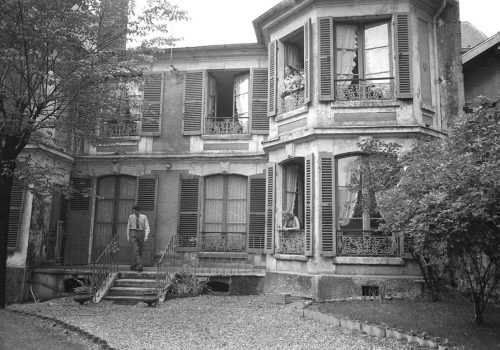 The press agency of Reporters Associés is part, with APIS, Dalmas, Europress and some others, of the photo agencies who were created in the 1950s and flourished with the development of the magazines Paris Match, Stern, Jours de France etc. They foreshadowed the success of the Gamma, Sipa and Sygma agencies. They are the cradle of women and men who invented the “French photojournalism” of the second part of the 20th century.

Louis Le Roux, laboratory assistant and photographer, then head of the Reporters Associés laboratory before becoming that of Sipa Press is not only an actor, but also an attentive observer of this period. His testimony is exceptional with details both on men and women and on the evolution of techniques.

Born in Brest on October 12, 1934, I had just spent three years in Naval Aviation. I was twenty years old and  going up to Paris. The dice were thrown, I was hired by Lova de Vaysse the boss of the press agency of the Reporters Associés, as “photo printer”, then, as “head of the photo service” title that I will keep my whole career. I do laboratory work but also shoots. I buy a Rolleiflex. I get my press card number 16 870 because I am also a photo reporter. I think I must be today a press dinosaur.

In October 1953, the press agency of Reporters Associées was created by Lova de Vaysse, Renaud Martinie and journalist André Sonine who was killed in a car accident while driving a Floride car. Lova de Vaysse will always tell me “Never buy a Floride it’s a rolling coffin”. Lova de Vaysse and André Sonine are both defectors from the weekly France Dimanche. They are joined by the photographer, Jacques Blot, a friend of Lova de Vaysse and by Claude Rodriguez, of Belgian origin, who runs the laboratory and who will later become a photographer. Later, Raymond Darolle will also work there for a while before founding his own Europress agency.

Lova de Vaysse and Renaud Martinie set up the company in a 60 square meters, sublet avenue Frochot, a private street in the 9th arrondissement near Pigalle, in a superb villa rented to the couple Roby Davis and Andrée Daidy-Boyer.

Andrée “Daidy” Boyer, friend of Lova de Vaysse, is a woman impresario very fashionable among the artists of the time. She discovered many talents and organized the tours of the biggest stars of the music hall of the 1950s: Django Reinhardt, Dizzy Gillespie, Charles Trenet, Henri Salvador, Gilbert Bécaud, Mistinguett, Tino Rossi, Mouloudji, Edith Piaf, Charles Aznavour, Roger -Pierre and Jean-Marc Thibaut. Roby, her husband, was a known saxophonist at the time.

Starting in 1960 she became “Mamy Scopitone” and filmed singers and artists. This is how the company Davis-Boyer Productions still has one of the largest catalogs of artists and singers archives and is co-managed by Katherine Richkoff, daughter of Lova de Vaysse.

Back to topic. The 20 years old Breton that I am is adopted and I quickly became the son of the family. Lova de Vaysse will be my teacher. The first months were quite hard. I stayed in a hotel in Boulogne Billancourt and crossed the city every day to work in Pigalle. My parents helped me financially for two months, then I became independent.

Through a friend, I found a maid’s room on Boulevard des Batignolles near the Villiers metro station, I was close to work …

I no longer remember the first images printed in the “Cabin-Lab” of the Reporters Associés, because what we called “the Lab” was then a small room measuring 2m by 2.20m! A real cabin. There was still a small opening with unfortunately a curtain that let in unwanted light. In the lab, you have to work in absolute darkness!

On a long DIY table, there were three basins: one for the developer, the others for rinsing and fixing the photos. No way to empty them, it was necessary to transport the basins and pour them in a sink in which the washing of photos was also done.

In the same room, three small eight-liter tanks allowed the development of the films. Opposite, a wooden enlarger dating from before the war of 1940 … The Imperator, this august device was hung on the wall above a work board. It was an obsolete machine but still made good prints. There was still a small space to move around inside the room. Inactinic lighting was done with a sodium lamp.

Leaving the lab, on the left, there was a flat drying and glazing machine to dry the photos that came out on glossy paper, a table to display the photos, a few shelves for archiving. This was the agency I discovered! It was not great, it was going to be a job.

To the right of this room was the bedroom of Lova and Jacqueline de Vaysse, and opposite, a corridor leading to their kitchen and bathroom. Under the veranda which welcomed me: a table, a desk, a typewriter for Jacqueline de Vaysse to type in the texts, and where Renaud Martinie the accountant and sales person worked. Behind the desk, under a miller’s ladder there was a small bed for Katherine the boss’s daughter and above a small loggia where she could study!

Vaysse’s family slept in this same room! Their room was next to the little cabin which was the lab. As we worked both at night and on Sunday, if I arrived early in the morning, I would find them in bed! It did not matter. It was a bohemian life! But I never heard the family complain. They lived, dined, and slept in their working place…

When they sometimes left for the weekend or on vacation, Lova de Vaysse offered me to stay at the agency. I slept and worked there, it was the right thing. It is true that living in a maid’s room it suited me well. I was then the boss of the business!

This was often the case from 1955 to 1960 until the year of my 25th birthday and my marriage to a charming and pretty hairdresser.

I was a little scared because at the beginning, reportages were rare: one or two per week. To keep myself busy I turned the earth over at the entrance of the agency to sow grass and put some flowers in it. In addition to the laboratory, here I was a gardener!

This article first appeared on the A L’OEIL – Journalism & Photography website : http://www.a-l-oeil.info/blog/