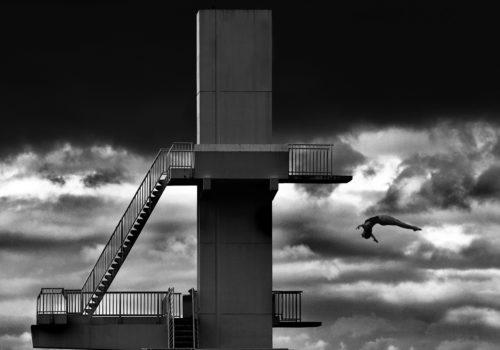 Michel Tréhet : An obsessive relationship with the image

Born in Le Havre, Michel Tréhet is a painter, art director and photographer. After graduating from the Ecole des Beaux-Arts (Graphic Arts and Advertising) in 1968, he worked as an art director in advertising, before joining the Opera/BDDP agency a few years later. At the same time, from Le Havre to Paris, passing through New York, Tokyo and Geneva, he had exhibits as a painter. In 1993, he started standing on his own two feet and became creative for various major brands.
In 2009, he was caught by photography. This led to a series dedicated to Deauville and Trouville. Then another: “Flash on the A13”, photographs taken from a cell phone on the road. In 2014, on the occasion of the Deauville Photography Festival, he produced a series in B&W in which he integrated a Barbie Collector dressed by the greatest fashion designers (Christian Dior, Chanel, Givenchy, Louboutin, etc…). The exhibition will travel from Shanghai to Paris, passing through St-Tropez and Honfleur.
Since 2015, he has been developing “Archisable” by Tina Dassault, a photographic project where internationally renowned architects are invited to confront the sand on the beach. He thus renders through the image, the ephemeral immemorial.
His universe is pure and graphic around a sober language. His creations speak about moment of life with a very personal look.
Photography is for him a means of expression, which transmits emotion, imagination, memories. It is a beautiful way to tell stories. The role of the photographer is to show things at their best, without artifice, in black and white.

Your first photographic trigger ?
Michel Tréhet : When I was 14 years old, I took a picture of Eric Tabarly on Pen Duick in Le Havre. I was right next to him. I lost this print today, but I remember Tabarly’s pose, giving the impression of dancing on the deck of the sailboat. I had captured, without realizing it, an expressive and unusual attitude.

The man of images who inspires you?
Michel Tréhet : Wim Wenders, photographer. The closest to my writing today. I like his composed, graphic and efficient eye. This can be seen in Paris Texas.

What image would you have liked to make?
Michel Tréhet : I would have liked to have been in New York during the blackout in 1997, lit by the headlights of motorists. But I became a professional photographer only in 2010, after studying Fine Arts and working as an art director in an advertising agency.

Which one moved you the most?
Michel Tréhet : A photo of Steve McCurry, the afghan girl.

And the one that made you angry?
Michel Tréhet : The napalmed little girl by photographer Nick Ut during the Vietnam war is particularly shocking and shows the atrocity of war.
What makes me angry is that no lessons are learned from history.

A key image in your personal pantheon?
Michel Tréhet : “Les Roches Noires à Trouville” Because it goes further than a simple photograph. It is a painting. It is unique and more feasible today. Many have copied it but have not understood it.

With no budget limit, what would be the work you would dream of acquiring?
Michel Tréhet : I am fascinated by Jean-Michel Basquiat and Andy Warhol.
I agree that it is rather banal, but they are familiar to me, just like the Beatles or David Bowie. I like their career, I like their writing, I feel close to them and so I would choose Warhol’s self-portrait.

According to you, what is the necessary quality to be a good photographer?
Michel Tréhet : Obsession without compromise.

The secret of the perfect image, if it exists?
Michel Tréhet : Emotion. Often the concordance of several elements that compose it. The photo doesn’t need a caption, we don’t sell the photo. But it is perfect for whom?

The person you would like to photograph?
Michel Tréhet : None. I don’t want to photograph a person who is going to tell me: remove my wrinkles, rectify my mouth, I have a bad hair style, …

An essential photo book?
Michel Tréhet : I have a library rich in talent. It lives and moves. I look at it, I move it, I open it, I enrich myself, I know it, it is active, it is a joy. All the books are indispensable. My entire library is indispensable. From Lindberg to Issermann, from Weiss to Sarah Moon, from Rodtchenko to Wim Wenders, from Olaf to Irvin Penn, … They all play a role as references.

The camera of your childhood?
Michel Tréhet : the Brownie Flash Kodak, the instamatic 124 Kodak, Polaroid, …

The one you use today?
Michel Tréhet : The Iphone, the Nikon D850, the Nikon D4S, in fact it doesn’t matter. I feel more a creative than a photographer. My first exhibition was made with the first cell phone with a built-in camera in 2010. Photos I took daily on the road between Deauville and Paris.

Your favorite drug?
Michel Tréhet : Freeze frame: introspection and solitude: I hate walking around with a camera.

What is the best way for you to disconnect?
Michel Tréhet : The game of Solitaire on my laptop, not always disconnected! An hour on the beach whatever the weather.

What is your relationship with images?
Michel Tréhet : It is obsessive. I live only in images. I am fascinated only by images. I watch films without sound, to better read the images.

Your greatest quality?
Michel Tréhet : Wisdom, patience, the quest for perfection, which can sometimes be the defect of my qualities.

Your latest folly?
Michel Tréhet : I lack folly. My training at the Beaux Arts gave me a taste for rectitude, alignment. Everything is thought out and nothing is free. This lack of madness can often create a real frustration that I will try to repair.

An image to illustrate a new banknote?
Michel Tréhet : Maybe a Basquiat. Bringing art, imagination, tolerance, talent but at the same time not speculation… So, all white the banknote in braille.

The job you would not have liked to do ?
Michel Tréhet : salesman of electric plastic Eiffel Towers made in China.

Your greatest professional extravagance?
Michel Tréhet : It is perhaps to have created in 2 months an exhibition presenting 60 photographs of Barbie collector for her 60 years. The press loved it.

The city, the country or the culture you dream of discovering?
Michel Tréhet : Cuba. I would like to know how I would look at this setting that has been photographed but also trivialized so much. We have the impression of always seeing the same photos. Except in the eyes of Agnès Varda.

The place you never get tired of?
Michel Tréhet : The beach. Since my childhood, I have been lucky enough to live by the sea and I still enjoy it today.

Your biggest regret?
Michel Tréhet : My modesty and not believing in myself.

As for social networks, are you more into Instagram, Tik Tok or Snapchat and why?
Michel Tréhet : I am more Insta, a way to present my work but I have a lot of distance to the networks. Today with the technological means, anyone can take pictures and get them circulating . Many think they are “professional photographers” without any problem of image reproduction rights.

Color or B&W?
Michel Tréhet : Both. Some images live well in color when it is part of the story. B&W unifies the images and avoids unfortunate color combinations.

Daylight or artificial light?
Michel Tréhet : I love the accidents of daylight.

The most photogenic city according to you?
Michel Tréhet : Brasilia. A real open-air museum, a UNESCO World Heritage Site.

If God existed, would you ask him to pose for you, or would you opt for a selfie with him?
Michel Tréhet : No. Not him or anyone else either.

Which image represents for you the current state of the world?
Michel Tréhet : The image is destruction, intolerance, egoism, poverty, dictatorship, pollution, … then we could show an image that presents the beauty of nature to better make people aware of the state of disaster.
“We do not inherit the earth from our ancestors, we borrow it from our children”.

What is missing in today’s world?
Michel Tréhet : The beauty of the heart.

If you had to start all over again?
Michel Tréhet : Yes, I would start again, trying not to make the same mistakes. I still feel like a child and look at the world with innocent eyes. Everything is an eternal beginning, a rebirth, so everything is possible.