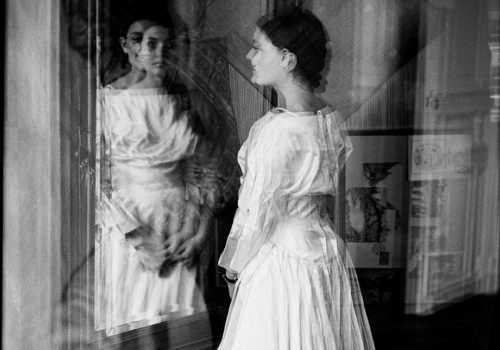 CAROLE BELLAÏCHE : BEAUTY AS IN THE MOVIES

Carole Bellaïche was only 13 years old when she discovered her vocation for photography. From that moment on, she took pleasure in staging her young high school friends and very quickly learned to make her own prints in her small dark room. Encouraged the following year by a decisive meeting with Dominique Issermann, she took her passion seriously. At the age of 17, on the recommendation of Dominique Issermann, she realized portraits of actors who called upon her to realize their “book”, and her activity became very quickly professional.

Also passionate about cinema, she decided to realize between 1985 and 1988 a series of portraits of actors and filmmakers in Parisian museums, a series that was exhibited at the Agathe Gaillard gallery in Paris in 1989. In 1992, she began a collaboration with Cahiers du cinéma which lasted fifteen years and allowed her to meet and immortalize all the great actors and filmmakers of the Seventh Art. It was during this period that she photographed Isabelle Huppert for the first time, then in rehearsal in Lausanne for the play Orlando, directed by Bob Wilson. A year later, Carole was surprised to be contacted by the actress who wanted to be photographed as Marlene Dietrich for the needs of a film by Louis Malle which, unfortunately, was never made. But this magical session marked the beginning of a photographer-model relationship that was almost never interrupted.

Her talent as a portrait artist, free of the codes of traditional posing, was confirmed. While continuing her personal work and exhibiting it regularly she chose to join the Sygma press agency in 1998, then the H&K agency.

In 2002, the month of  Photography in Paris dedicated to her a big exhibition sort of mini retrospective in the museum of the National Archives “Portraits” gathering exclusively portraits of women, famous and anonymous.

In November 2007, the Turin Cinema Museum paid tribute to her by exhibiting 140 of her photographs of icons of the silver screen, most of which were taken for the Cahiers du Cinéma. At the same time, Natacha Defontaine directed “Portraits of actresses” a documentary on her.

In 2010, on the occasion of the release of a children’s book, she exhibited “Scènes d’enfants”, a series of photos of her own children at the Galerie des Femmes in Paris.

We are in 2013, and her passion for portraiture, for places full of history, for staging, led her little by little to make a first short film with the actress Fanny Ardant. This was followed by commissioned films. Alternately photographer and filmmaker, she continued her work in the same quest for memory and light in a very personal way.

Her Parisian exhibition at the Embiricos gallery during the month of Photography in November 2014 called “The Collector”, revealed her photos of places, the places of her childhood, and also the places she seeks for her portraits to stage her actors.

In 2018, on the occasion of the release of the book with Alain Bergala “Between young girls” published by Yellow Now, she exhibited at the gallery Sitdown her very first photos made at the age of 14.

Her photographs are for Carole her collection objects, whatever they are. They are the real proof of moments lived. They are part of a personal research, even if some of them were made for the press, for magazine covers. Passionate about people, she likes to pierce the mystery in each of her models. Actresses are for her ideal models because they are ready to do anything including changing their image.

In 2019, a book on her 25 years of photography with actress Isabelle Huppert was published by Editions de la Martinière. It testifies to a special bond between the two women, a bond woven through sessions, studio experiences, photos on the street, in cafes, on trips, or on the occasion of important moments. Each of her images shows a different face of the actress, she transforms herself, plays at being someone else, let the mystery linger, it is undoubtedly what we call the  moment of magic.

Currently, “Portrait(s)”, the Rendez-Vous Photographique de Vichy (which continues until September 19), allows you to discover on the Esplanade du Lac d’Allier this woman with a thousand faces that is Isabelle Huppert, sublimated by the eye of Carole Bellaiche.

And in September, her book “25 Bd Beaumarchais” will be published by Revelatoer in which she will reveal her first thirteen years of photography in her childhood apartment. This will be followed in November and December by an exhibition at Galerie XII.

Carole Bellaiche : A 14 year old girl, very beautiful, my best friend, posing against a tree in front of the Mediterranean Sea. An old woman from behind in the huge room of a museum in Siena, Italy.

Carole Bellaiche : Lartigue for many things and Brassaï (and all the others).

The image you would have liked to make ?

Carole Bellaiche : The first photo of the shoeshine man on Boulevard du Temple in the empty boulevard because of the long pause.

The one that moved you the most ?

Carole Bellaiche : My son Rafaël at the age of 9, his hair curled around his face in Southern Italy, in a field, holding a bouquet of flowers in his hands. And also, my first cinema shot, with Fanny Ardant, when I realized that she did not have to stay still in my frame. A great moment with someone I love.

And the one who made you angry ?

What is the necessary quality to be a good photographer ?

Carole Bellaiche : The passion of others, meeting them, looking at them, hearing them…

Carole Bellaiche : The divine light, a magical place, a character from the front or the back.

Carole Bellaiche : A Nikon FM2 and especially an 85 mm.

Carole Bellaiche : It doesn’t matter to me in digital it’s a Canon, but also my Leica M6 or my Contax medium format 645.

Carole Bellaiche : A ray of sunshine inside, a movie shot, a beautiful face, beauty in general.

Carole Bellaiche : Being a photographer.

Carole Bellaiche : An ocean liner on the waves.

Your biggest extravagance as a photographer ?

Carole Bellaiche : When I nearly  killed myself in a car accident while going to photograph Michel Piccoli at the theater in Nanterre, I was so moved. When he arrived, he told me that he didn’t have time to take any more pictures. When I went up on the roof of a train to photograph the landscape in front of the sea.  Or when I chased Robert de Niro, between Cannes and Cap d’Antibes, in a convertible, to take his portrait at the Eden Roc during the 1995 Cannes Film Festival for Cahiers du Cinema.

Carole Bellaiche : Not having made a feature film yet.

If God existed, would you ask him to pose for you, or would you opt for a selfie with him ?

Carole Bellaiche : I would make a beautiful portrait of him a 6/6, we could turn it over on all sides since it is a square.

The image that represents for you the current state of the world ?

Carole Bellaiche : A man, a woman, masked, on the ground in the streets of a deserted city.