The Metamorphosis of Nostalgia. Exoticism and Photography between 19th and 20th Centuries 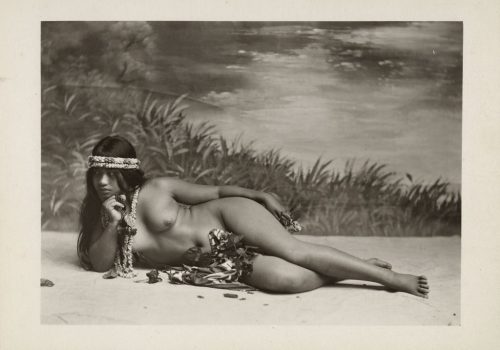 Villa Malpensata is staging The Metamorphosis of Nostalgia. Exoticism and Photography between 19th and 20th Centuries. The exhibition at Musec – the Lugano’s Museum of Cultures – is inspired by the emotions stemming from the idea of the contact with foreign lands and people. Next to vintage photos, a selection of albums and travel journals, all from the museum’s archives and from major private collections enables the visitor to feel involved in remote places and atmospheres. “Indeed, the exhibition title echoes the observers’ reflections on how exoticism has been changing since then”, the exhibition project manager, Moira Luraschi, says.

There are some forty photographs on view, taken by Westerners (such as Lucien Gauthier, Félix Bonfils, William Notman or Wilhelm von Gloeden, whose self-portrait was showcased during the first ‘session’ of the exhibition) in non-European contexts, between 1860 and 1950. They are distinguished nearly exclusively by the Western perspective. “This period matches the birth of the concept of exoticism (as well as the one of colonialism) and its after-effects can be noticed even now”. The exhibition, curated by Francesco Paolo Campione and Marco Fagioli, also “includes landscapes, as the ‘concept of exotic place’ was born in this period, too. It can be spotted in photography, as well as in travel diaries and guides. Meantime, technology (e.g, trains and steamers) led to a ‘smaller’ and more reacheable world. People who never traveled began to know it, too. And photography took on the dual role of documenting the ‘view from elsewhere’ and of memorizing the experience, a basis on which an exotic imagery was forming”, she adds.

As The Metamorphosis of Nostalgia opens a new space devoted to photography and dedicated to the well-known ethnologist and photographer Fosco Maraini, L’Œil de la Photographie asked Francesco Paolo Campione, director of the Musec, why does the Museum cares for photography so much.

“It’s a decisive event, part of the Esovisioni project that Musec started in 1995 and developed as a challenge. The aim was to examine the relationship between the photographer and the object in his photos from a different perspective, as photography of exoticism was characterized by some kind of mirroring principle. It seemed the photographer, instead of shooting a distant reality, an external one as it actually was, took his pictures unveiling a part of his own soul. That’s why since 2005 the Musec has been exploring some reportages by the great 20th-century masters (Fosco Maraini and Walter Bosshard among them). A specific ethnological approach and an outstanding aesthetic quality were hallmarks of these authors’ artworks. We also found they included their telling about their own inner world in their aestetics as a constant.

The Musec “exported” the Esovisioni project to many European towns, thereby providing the museum a particular visibility: many collectors started to donate or to leave in permanent deposit their artworks to the Musec. As in the case of the important collection of Japanese photos we received in 2009 (the Ceschin Pilone Foundation, ed.). When the museum moved to its new venue at Villa Malpensata, the consensus on the project and the deep connection between photography and ethnology led us to dedicate an exclusive space for photography, focusing on its relationship with culture”.

Why is the issue of exoticism in photography still quite an interesting phenomenon?

“It used to be a remarkable issue when identities were far apart and there was a chance to measure distances. The photography of exoticism was the perfect way to do it. Nowadays distances are shorter, but identities are still strong (though less visible as they are produced in a more impartial way) and photography can unveil the differences and highlight the identities. Indeed, a work on exoticism is now even more interesting, because it deals both with all that’s left of the originality of the cultural identities and with how they are transforming themselves.

The Metamorphosis of Nostalgia shows photos from the past, reproducing the reality of that time. Nevertheless it manages to engage visitors thanks to a specific allure, that suggests a closer analysis. Why?

“Indeed, nowadays it is more and more difficult to properly contextualize our past. There is not enough time. Ancient photography pictures a distant past and belongs to it.  They actually include the attractiveness of their antiquity, of their being vintage. They were shot while the subjects were alive and there is a tripartition in them: the photographer, the object and the viewer. They all belong to the same period. It’s like opening a window into time and, while concentrating in front of an artwork, we allow our inner awareness to interact with it. Moreover, the mission of a museum regards the conservation of cultural assets and the preservation of the memories: and ancient photos become witnesses of collective memory”.

The forthcoming exhibition programme is thought as a journey through the photography of exoticism, going on with the Esovisioni project. Next date at the Musec will see a reportage on Morocco by Roberto Polillo. The Lugano’s Museum of Cultures is also planning exhibitions enriching the museum’s collections (more than twenty thousand pictures, most of them from the 19th century).

“We’ll be also launching, together with an art gallery in Milan, an international award for young photographers. Exhibitions at Musec and in Milan will be organised for the winners” director Campione says.

The Metamorphosis of Nostalgia. Exoticism and Photography between 19th and 20th centuries