The Extraodinary Colors of Robert Capa 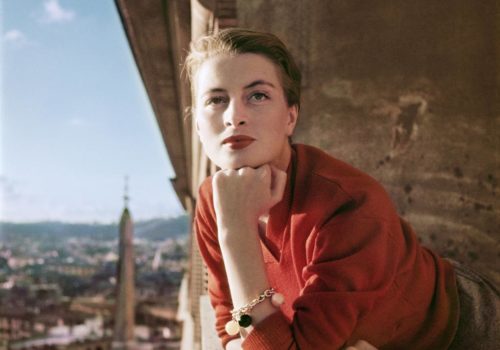 With his photographs of the Spanish Civil War and the Normandy invasion, the photojournalist Robert Capa has always been considered a giant of black-and-white photo reportage. But how much do we really know of his work in color? That’s the question posed by the groundbreaking exhibition Capa in Color at the International Center of Photography, perhaps its greatest in the past five years.

On display are a hundred color photographs taken in different places. (The ICP archives hold 4200.) Half of these have never been published, and they show that Capa was a prolific user of modern (in their time) techniques. Stigmatized by photojournalists and magazine editors, color was seen as not only less powerful than black-and-white, but a nuisance given the time it took to develop and print a Kodachrome series. Robert Capa used it nonetheless, for the first time in 1938 while covering the Sino-Japanese War. During the first two years of World War II, he carried both types of film. Some of his reports were filed in color but published by his editors in black-and-white.

In 1941, during a trip across the Atlantic, he captured what life was like aboard an Allied ship, and produced a similar series in 1943 while traveling from North Africa to Sicily. We see a portrait of a sailor in bright blues and whites, a boxing match between English soldiers, and a French cavalcade on camelback in the Tunisian desert. The colors are spectacular, and the compositions are strikingly, almost eerily, modern.

Whereas Henri Cartier-Bresson went to his grave despising color, Capa seems to have acquired a fondness for it before his own death in 1954. There’s a feeling of peace in these photographs taken mostly after the war: images of calmer days, travels, vacations, private moments. We see Capucine, the French actress, whom he photographed on a Roman balcony, and whose beautiful eyes turned him into a fashion photographer. An American girl on skis, whose sunglasses reflect the mountain’s slope with an incomparable clarity, shot in Switzerland in 1950. A family of Norwegian Lapps in traditional dress, photographed while sharing a kiss.

And then there were friends. Pablo Picasso playing with his son, Claude, on a French beach. Truman Capote and Jennifer Jones on an Italian film set. Ernest Hemingway sitting on the ground across from his son, Gregory, in Sun Valley in Idaho, USA. Beyond the relationship between black-and-white and color, the exhibition reveals Capa as not only a master of reportage, but a peerless portraitist. The legend is reborn.

EXHIBITION
Capa In Color
Until May 4, 2014
International Center of Photography
1133 Avenue of the Americas at 43rd Street
New York NY 10036
USA