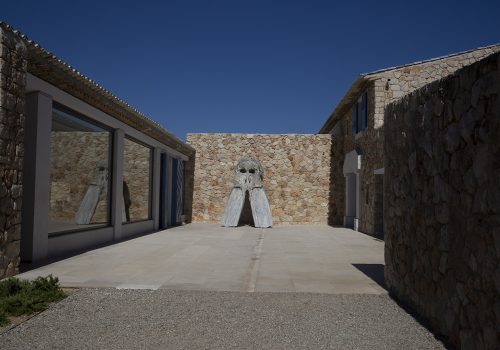 At the heart of its magnificent estate in Porquerolles, the Carmignac Foundation presents ten years of reporting on the Carmignac Photojournalism Prize from July 4 to November 20, 2020.

In a dazzling natural site of exception, the new art center of the Carmignac Foundation dug between heaven and earth shelters a wonderful exhibition space which is reminiscent of the Maegh Foundation in Saint Paul de Vence. Very beautiful volumes with a ceiling of water that lets in a vibrant light give a special atmosphere to the large picture rails which are hosting the retrospective of this Photo Prize.

Pierre Fahys for the editorial direction and Sylvain Roca for the scenography were able to perfectly orchestrate the series of ten photojournalists dealing with subjects poles apart from each other but retaining remarkable consistency in their engagement.

The works of Davide Monteleone on Chechnya and those of Robin Hammond on Zimbabwe are skillfully combined with the melancholy gaze of the formidable Iranian artist Newsha Tavakolian.

Narciso Contreras’s reports on modern slavery bear witness to the horror of human trafficking, the largest market for which is in Libya. Its echo is presented with intensity in the trafficking of women in Nepal that Lizzie Sadin has remarkably described, both testifying at the cost of considerable risks.

Christophe Gin then takes us to French Guiana where the spirit of the republic is a very distant concept. His striking images encourage us to look at this ecological disaster in full awareness. Tommaso Protti’s report on the Amazon was difficult to achieve, in the expanse of the Amazonian forest plagued by wild and inexorable deforestation.

The extraordinary report by Yuri Kozyrev and Kadir Van Lohuizen on the Arctic catastrophe mixes prodigious realism and aesthetics – we cannot forget the immense prints presented at the Cité des Sciences in La Vilette two years ago already. Finally, the reportage of Finbarr O’Reilly in Congo takes us to the heart of the cruel Ebola epidemic.

On the road to Perpignan and the “Visa pour l’Image” festival, severely affected by the current crisis, do not hesitate to take a detour to the islands of Porquerolles: thanks to the Carmignac Foundation, Photojournalism is brought to life, honor and light. We emerge seized by so many political, economic, ecological and social scourges, contrasting violently with the magnificent beauty of the Mediterranean landscape. This exhibition must be visited barefoot, humbly invited on the beautiful terracotta slabs. It remains for me to highlight the extraordinary achievement of the DUPON PHIDAP laboratory for the quality of the prints and framing.