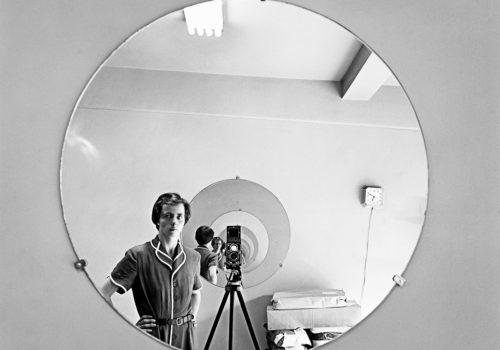 The story has now been told many times: a person defaults on their storage lockers, the contents go to auction and a bonanza of undeveloped film, negatives and prints are revealed. When some of the material is released on the internet, the unknown photographer is discovered to be a woman, Vivian Maier, a resident of Chicago where she lived for fifty years.

The majority of Maier’s lifetime prints were of French landscapes, the country her grandmother had left and where Vivian bought her first camera when she went there in 1950 to claim an inheritance. A self-taught photographer, she pursued her hobby after returning to New York and gaining steady employment as a nanny. The purchase of a Rolleiflex, held at waist height, allowed inconspicuous picturetaking on the city’s streets – she called them ‘shooting safaris’ – and encouraged her penchant for self-portraits in mirrored surfaces. After an uninspiring move to California, she serendipitously arrived in Chicago where she settled down, again as a nanny, pursued her interest in photography and took six months’ leave to travel around the world as a passenger in a freighter.

Maier switched to Leicas and colour slides in the mid-1970s and started making Super 8 films with an audio-cassette player in the pursuit of interviews with strangers and people she knew. Hoarding became obsessive and her savings were deployed to rent storage space for what became a portfolio of over 140,000 images. Rarely returning to view them or share them with others, Maier’s passion for photography remained clandestine, her own enigmatic hinterland.

Vivian Maier, originally published to accompany an exhibition of her work at the Musée du Luxembourg that ended in January 2022, is eloquent testimony to a sui generis photographer of the first order. What possessed her to pursue a largely hidden life calling and who influenced her approach to the taking of pictures remain unknown. Her roving eye was omnivorous and her field of view wide open to social and political events as well as movie celebrities, high society on Fifth Avenue but also marginal lives in seedy neighbourhoods and criminals brought to police stations. A genealogy for her style of photography suggests the work of Diane Arbus, Helen Levitt and Weegee but they cannot define or explain Maier.

Vivian Maier’s wealth of photographs is divided into eight sections: some have obvious titles (‘Portraits’, ‘Streets’, ‘Color’) – while others (‘Gestures’, ‘Cinematic’, ‘Forms’) point to the heterogeneous nature of their content. The three editors, Anne Morin, Christa Blümlinger and Ann Marks, each contribute an essay with informative insights into the singular nature of Maier’s life and work. Morin draws on a host of references, from Samuel Beckett’s Film to thinkers like Levinas and Virillio, to help elucidate the quality of Maier’s oeuvre; Blümlinger focuses on her film work; and Ann Marks provides a useful biography that keeps to fascinating facts without succumbing to mythmaking.