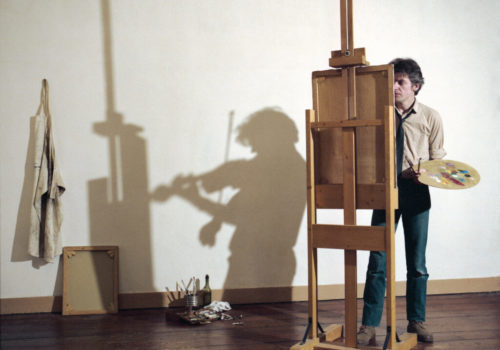 Last weekend, the Dutch photographer Teun Hocks died from a lingering illness. He belongs to the world’s best, and enjoyed international recognition, although strangely enough sometimes more in e.g. the USA than in the Netherlands.

Teun Hocks worked between Saint-Pierre-les-Bois (region Centre – Val de Loire, France) and the Netherlands. He was known for his “photo paintings”, the result of a complex creative process… The starting point for his work was usually an incident or a chance observation which he recorded in a sketch. This sketch is converted in his studio into a life-size set with all the necessary props, which he also created if necessary. He then took place in the set for the shoot with a Horseman 6 x 9 camera. The large format barite print was coloured in sepia, and only then did the final phase follow: the print was transparently painted with oil paint, very meticulously with a wad of cotton wool attached to a toothpick. The result were unique photo paintings of which three were always destined for his galleries. It seems as if Teun Hocks was permanently torn between uniqueness and reproduction, between photography and painting, – painting which, on the other hand, very often appears as the subject in his pictures.

The young Teun studied art at the academy St Joost (Breda – today Avans Hogeschool) where he graduated in 1970. At that time, photography was not yet considered a fully-fledged means of expression, but he himself had experience of the possibilities of the medium from home – his father was an enthusiastic photo amateur.

After his studies, Hocks started working with performances, film, painting and photography under the influence of pop art, among other things. He began to paint his photographic images, and this remains a common thread throughout his oeuvre.

A second characteristic: just like Cindy Sherman, Teun Hocks has had only one subject throughout his career, himself. Sometimes he duplicates himself, or uses a doll that in turn depicts himself. Don’t get me wrong, though: it’s not vanity that’s at the root of it, quite the contrary.

His inspiration are the little annoyances of daily life, the everyday powerlessness, the trivial frustrations, the senseless outbursts of anger that seem comical to the viewer, the ordinary accidents. It is a mirror of our existence, unpretentious, banal. Just as banal as his alter ego, a little bourgeois man who is always neatly dressed. It is an Elckeryck an Everyman (a figure from the medieval moralistic theatre).

The artist did not only work in his studio, certain pieces were brought to the public on a different scale: the German railways wrapped a locomotive with the 1990 Untitled work under the banner ‘Die Bahn Verbindet’ or ‘The railways connect’, Understanding Society 2013 became a tapestry in the Aula of the University of Tilburg, and for the Grote Kerk (Main Church) of Dordrecht he realised three stained glass windows. A certain commitment is to be found in some of his works, with the homeless in Untitled 2008, and the climate issue in Untitled 2015 (Drowning).

If you look at Hocks, you see Goya here – in The Monsters in the Late Hour of 1985, or there Ensor where the man stands in front of the cabinet of curiosities/ shells and masks in Untitled 1994, or the poor artist warming himself at his painting (Untitled 1989).

One can make numerous comparisons with the oeuvre of Hocks – the melancholy of Buster Keaton’s films, the surrealism of René Magritte, the vaudeville of Charlie Chaplin, the absurdity of Samuel Beckett, the benevolent parody of Jacques Tati, the game with the scale of the image as with Escher, the comic strip of Hergé, the obsessions of Ensor, the monsters of Goya, the helplessness of Charlie Brown from Peanuts and we could go on and on. This wealth of references only confirms the contemporary character and uniqueness of Teun Hocks’ oeuvre.

He is the ultimate consolation for the complacent human being or in the words of Moniek Toebosch spoken in Breda 1999:

“When other artists reach the end of their tether, an absurd Hocks hanging somewhere doesn’t know which way to go, where to start and certainly not where to end, because his work – pardon the expression, is desperate in the most positive sense – Hocks is the ultimate comfort…”

Teun Hocks was an engaging artist, modest, who didn’t want to explain his images. It was the viewer who had to give meaning to it. Michèle Schoonjans from the eponymous gallery in Brussels aptly said goodbye with the words

“He left to join the stars in the sky, leaving behind the souvenir of a man who handled humour with subtlety and finesse”.

I can only agree.

Reportage in Dutch, however, this is not an obstacle for the interested viewer as the few spoken lines can be understood through context.

TEUN HOCKS is REPRESENTED BY

TEUN HOCKS was published in the EYE of PHOTOGRAPHY :