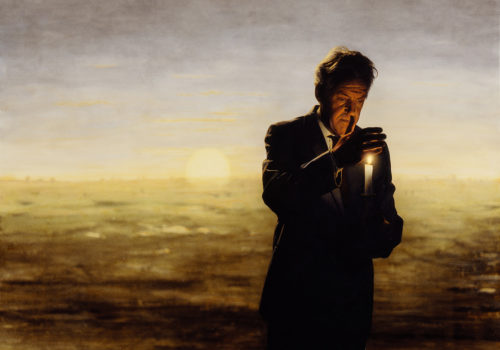 Michèle Schoonjans Gallery in Brussels presents the Dutch artist, Teun Hocks (1947), internationaly  known as one of the precursors of staged photography. According to Ken Johnson, in his review in The New York Times, Teun Hocks’ works are truly profound, like the one of an artist who, unaware of the sun burning on the horizon behind him, focuses on the candle light in his hand – a metaphor, perhaps, about the human limits of spiritual perception…

The exhibition, “Teun Hocks : Untitled”, presents a selection of analogue and digital works as well as original drawings tackling the artist’s topics and ideas, which serve as the basis of the various works by Teun Hocks.

In his creative process, Teun Hocks combines his many skills: performer, set designer, photographer, painter who also knows, like no other, how to exploit the vast possibilities of digital photography.

Before designing the backdrop and performing, Teun Hocks starts by translating his ideas into drawings. He then constructs the scenery in his studio, shoots with  black and white with a 6x9cm format film, prints large black-white pictures in sepia tones and thereafter paints them with transparent oil paint.

Teun Hocks creates scenarios based on scenes from everyday life or from his imagination.

The Dutch photographer does not hesitate to put himself in embarrassing, rather amusing or surreal situations, which depict conventions of simply funny and absurd situations or from his imagination. Funny, ironic, sarcastic and above all absurd, the images express inconsistencies between man’s dreams and expectations, and the reality of daily life, a characteristic of the absurd.

The fact that he paints his prints, enhances the confusing, iconic style of his photographs.

In recent years, Teun Hocks has expanded his work with digital photo series, with the difference that the results of these series, is more cinematic than pictorial.

These photo-paintings have no title, because the artist wants everyone, who views them to have the freedom to choose their own title.

In the vein of photographers who regard photography as a field of research, his projects are at the crossroads between painting and photography, and give the impression of ending up directly as an illustration, a drawing or a comic strip. Teun Hocks sensitively explores the balance between dreaminess, opinions and banality. He succeeds in presenting perfectly normal events in such a way that they automatically come across as (world) alien.

This gives his work a lyrical power, where black humour distracts us from reality and a gentle melancholy takes us into the poetic world of Teun Hocks. The artist has become a master in the art of playing the role of “the innocent Everybody” in an environment that is always strange, incomprehensible and almost always funny”, according to art critic Janet Koplos or to finish quoting Jean-Jacques Rousseau: “The world of reality has its limits, the world of imagination has none. “

Born in Leiden in 1947, Teun Hocks lives and works in Saint-Pierre-les-Bois in France and in Rotterdam in the Netherlands. He studied at the Academy of Fine Arts Sint-Joost in Breda.

In a career of more than 40 years, Teun Hocks has an impressive record of teaching at prestigious academies in the Netherlands: drawing at the Design Academy, Eindhoven (1980 – 2012) and photography and drawing at the Rietveld Academy, Amsterdam (1991 – 2000). Besides teaching, he has had a series of solo exhibitions in Europe and the US, including in 1999 ‘The Late Hour’ in the Muzee in Ostend in Belgium, and group exhibitions all over the world. He also works on commission, such as the stained-glass windows of the church in Dordrecht, the customisation of a locomotive of the Deutsche Bahn and then its model for the German miniature train manufacturer Märklin … . Teun Hocks is above all a performer at heart and to complete the circle, he sometimes takes part in theatre performances in the Netherlands.