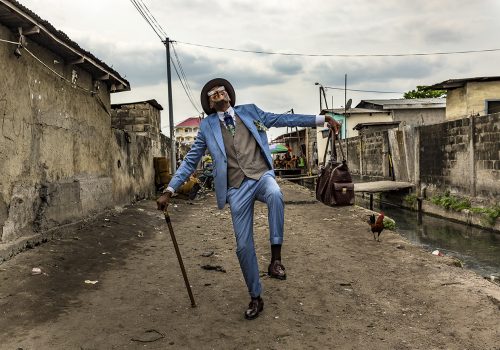 The photographs in Tariq Zaidi’s Sapeurs: Ladies and Gentlemen of the Congo are not easy to forget. Their context is highly specific – Brazzaville and Kinshasa – capitals of two countries that are probably more often confused with one another than any other pair of nation states in the world. As if to underline a blurring of the nations’ distinctive identities, the sapeurs of both republics proclaim in their dress style that culture can unite what international borders divide.

The geopolitical difference divorcing the Democratic Republic of the Congo (DRC) from the Republic of the Congo resides in their colonial genealogies. The DRC’s capital (formerly Leopoldville) was named after the Belgian king who appropriated the land; a French explorer, Pierre de Brazza, gave his name to the capital of neighbouring territory that he pioneered for France’s colonial acquisition.

The Congo river divides the capitals but it has always been culturally bridged by the Bakongo people of the region. Their resistance to colonial rule took sartorial form in the 1920s when, according to Zaidi, Congolese house servants ‘spurned their masters’ second-hand clothes and became defiant consumers’. Others, civil servants and musicians, also used their meagre incomes to dress in the latest Parisian fashions, producing visual markers of agency, acts of affirmation in the face of their subaltern status.

This unorthodox tradition evolved in the 1960s when a Francophone African elite adopted European couture and made it their own. ‘White people invented the clothes, but we make an art of it’: the words of Papa Wemba, a rumba musician from Kinshasa who formulated the acronym SAPE – the Sociéte des Ambianceurs et des Personnes Élégantes (the Society of Atmosphere-makers and Elegant People). Taken with the colloquial sense of se saper (to dress up smartly), sapeur as a neologism (female: sapeuse) emerged and a transcultural phenomenon was created.

Zaidi’s photographs show the refined environment of a Parisian fashion house being transformed by the sapeur, metamorphosed into, sui generis, a Congo catwalk of unrehearsed moments against backdrops of corrugated tin sheds, walls of breeze-blocks, unpaved streets, washing lines, backyards, discarded car tyres, goat herds. The audience are not well-heeled designers and buyers but ordinary city workers; and any supercilious pouting, so de rigueur for European fashion models, has a tongue-in-cheek quality. Being seen also photographed in their homes, adjusting a shirt cuff or tying shoes, serves as a reminder of their unprofessional standing; they do not dress up to be paid a fee. The formality of a model’s movements is replaced by a mobility and naturalism that Zaidi brings into the frame of his pictures.

The vivid colours in the photographs bring out the exuberance and flamboyance of the sapeur. This is dandyism with attitude, a confection of concocted colours with the conspicuous theatricality of an Alexander McQueen show. But while the iconography of a fashion show is observed, the semiotics is recoded and foppishness redefined in a strange synthesis of signs that unites pose with passion: an imported affluence adopted by the materially marginalized to rise above such   socio-economic demarcations in a spirit of contrariness.

Tariq Zaidi is by no means the first photographer to be attracted to this self-reflexive sartorial spectacle. Daniele Tamagni’s photo-essay, Gentlemen of Bacongo and Francesco Giusti Sapologie’s Sapologie photo series both appeared in 2009. Around the same time these three from Britain and France arrived on the scene, Congolese photographer Baudouin Mouanda was already on the ground.

Like any fashionista, the sapeur needs to be seen. But Susan Sontag’s remark that a photograph can be described as a quotation allows a book like Sapeurs to be termed an anthology of personal quotations. The last page of the book bears this out with its set of short statements about the featured sapeurs and sapeuses. The reader is informed that Severin Mouyengo and Judith Nkoressa, for example, are respectively a 64-year old retired forester and a 39-year-old policewoman. The provenance of their chosen attire is listed: Michele Florent Ngoma, for instance, wears ‘jacket by Cheyenne, trousers by Aosie Tommy, shirt by Party, tie by Fibre, waistcoat from Italy, belt by Terente, unbranded hat, locally made pipe, cufflinks by Montblanc, watch by MK and shoes by LK Bennett’.

Sapeurs combines documentary, fashion and street photography and, making the images even more hybrid, exists as portraits of individual men and women who are following a tradition of self-fashioning rooted in the particular history of the Congo.

Tariq Zaidi : Sapeurs – Ladies and Gentlemen of the Congo

Photographs and text by Tariq Zaidi