Sur Paris, The Roofs of Paris by Alain Cornu 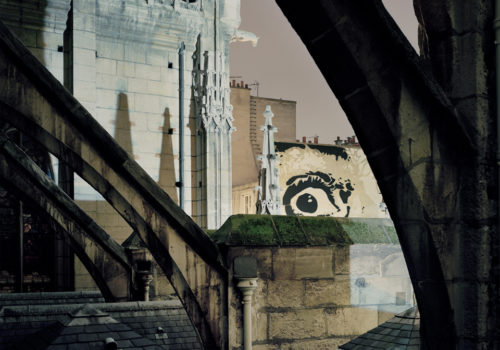 Alain Cornu, contemplative French photographer, invites us to dream by revealing the capital’s rooftops illuminated by the city lights. Paris. Paris and its lights. Paris and its zinc roofs as far as the eye can see. The romanticism, the most vivid symbols of collective imagination. We dream of these shadows and these hints of light that we can see escaping from windows as night fall. All the poetry of the urban landscape is expressed in Alain Cornu’s photography. Though at first glance it seems figurative, the series is revealed to be a force of abstraction, the photographer narrowing the frame of his shot on details, overwhelming emotions.

For more than seven years, almost every week, the photographer scales a new roof and sets up his equipment, a 4×5 chamber. From a long exposure under a usually covered sky, he captures the theatrical side of the romantic city, under the cover of the moon and the city lights.  Some artists chose to paint or depict a panoramic view, as Cézanne and Van Gogh had done with their brushes, Alain Cornu exposes the hidden angles and recesses, the lanterns and alcoves usually neglected.

“I began this series of photographs because I wanted to pay tribute to the city I love and look at it differently,” he explains. “Photographing rooftops, it’s to show what’s hidden while passing in the street, to rediscover Parisian buildings and monuments from a new angle. It’s also to extract it from the daily routine in order to become a witness more than a player. I chose to work at nightfall because it’s the moment that takes you back to the imagination and the intimate. Each skylight, each lit window is a life that can be represented. Aesthetically, artificial light structures the composition of my images.”

His project, born from a night of insomnia that led him to explore the roof of his own building, is an initiatory trip to the secret, poetic heart of Paris. Normally working on landscapes, Alain Cornu knows how to transform his subjects into fascinating objects. His previous series alternatively depicts trees, menhirs, twigs, windows, walls, doors, and streets. This time, zinc covered roof, gables, and chimneys bathed in dim light take on a new dimension through his lens, an infinite source of inspiration.