Stephen Shames and Bobby Seale, Power to the People: The World of the Black Panthers 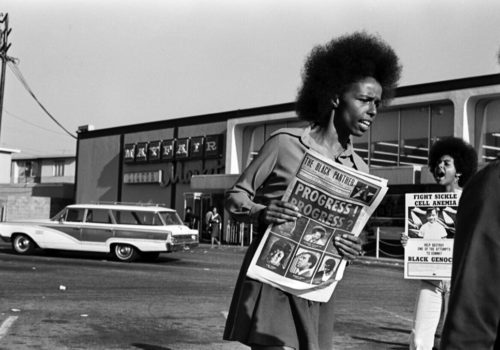 Stephen Shames’s book, which complements the exhibition at the Steven Kasher Gallery, is not a photobook; it’s a book about the history of the Black Panther Party accompanied by photographs. The nuance is a question of scale: as a scholar who writes history with images, the photographer has placed himself in the background, his photographs rounding off the six long sections containing texts and authentic documents which retrace the life of the Black Panther movement.

The book opens with an introductory text by Stephen Shames himself, evoking his stories and talking about the importance of the BPP and its influence. We also find political tracts from the period, eyewitness testimonies, interviews, and more generally a focus on those who were imprisoned or assassinated, namely Huey Newton, George Jackson, and Bobby Seale, among others. A large portion of the book is devoted to the social programs organized and run by the Black Panthers to support Black American community: schools, medical and social aid, free meals and food programs, and the party newspaper.

Black and white images enhance this constellation of writings and guide the reader through the history of racial inequality in America. This pairing of word and image is sustained through to the end, with the more recent pictures in color. The final section of the book surveys the present forms of discrimination and, in an instructive way, describes the attitudes needed to counteract it. Among the photographs included in the book we find a 1970 portrait of Newton and Seale before the party headquarters in Oakland, CA, and another of Jean Genet who came to show his support at a conference; there are also shots of political rallies, talks, and numerous portraits of “Panthers.”

In his introduction, Stephen Shames remembers his engagement with the movement: “In 1966, I was a student at the University of California at Berkeley. One of my roommates, Marty Roysher, had been on the steering committee of the Free Speech Movement the year before. With his guidance I became active in student government and the anti-Vietnam War movement. In August 1967, after a summer job at a plastics factory, I hitchhiked to the East Village of New York City. I bought my first camera during the Summer of Love. When I returned to Berkeley in September, I realized I was not suited for the endless meetings and bickering of politics. My contribution to the movement would be as a photographer. Documenting the Black Panthers became my first long-term project.

The first time I saw Bobby Seale and Huey Newton was on April 15, 1967, during the Spring Mobilization to End the War in Vietnam. My father had come up from Los Angeles, and we were marching together through the streets of San Francisco when my eye caught Bobby and Huey in their leather jackets selling Mao’s ‘Little Red Book.’ Their charisma and confidence captivated me. I took one frame.

I started hanging out with the Panthers, attending their rallies. Bobby Seale became my mentor and friend. He introduced me to David and June Hilliard, Elbert ‘Big Man’ Howard, Kathleen and Eldridge Cleaver, Emory Douglas, and Bobby’s brother, John. I was granted incredible access. Over the next seven years, culminating in Bobby Seale’s 1973 campaign for mayor of Oakland, I documented this group of young men and women, who were at the forefront of the Black Power movement and who became the vanguard of the revolution that was sweeping America.”

Stephen Shames and Bobby Seale, Power to the People
The World of the Black Panthers
Published by Abrams
$40

Stephen Shames, Power to the People: The Black Panthers in Photographs