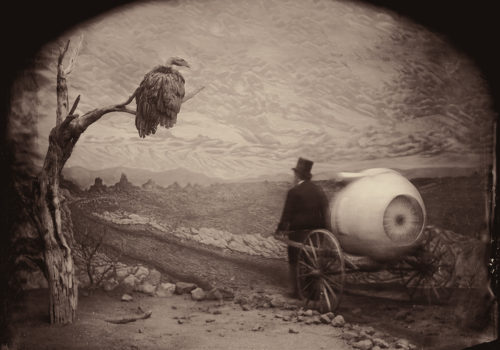 It is one of the most amazing books I have seen in a long time.

Its title: Predicting the Past, Zohar Studios: The Lost Years.

Its author: Stephen Berkman. This is the extraordinary story of a Jewish photographer who opened in the 19th century a photography studio in the Jewish lower east side of New York!

It’s easy to dismiss the camera obscura as a quaint optical novelty, but during its heyday in the sixteenth and seventeenth centuries, it figured prominently in reshaping scientific understanding of vision and optics. The first recorded use of a camera obscura dates to the fourth century BCE, when a Chinese philosopher named Mozi described how a pinhole camera formed an image at a “collecting-point.” Centuries later, in his book Magiae naturalis (Natural Magic), first published in 1558, Neopolitan artist Giambattista della Porta praised the obscura’s luminous projection of dramatic events:

In a dark room on white sheets you can see hunts, battles of enemies, games, and finally, everything you like, so clear and luminously, and minutely, as if you had them right before your eyes.

Let there be a spacious area outside the room where you are going to make these appearances, which can be well illuminated by the sun. In this you will place trees, houses…beasts or animals fabricated with skill from wood or other materials…each of these comes into the scene…so that those inside the room see [them] so naturally that they cannot tell whether they are real or due to trickery.

Benito Pereira, a contemporary of Della Porta, defined natural magic as “wonders created by the individual artifice of certain people who make use of things which are natural,” clearly distinguishing optical games from sorcery employed by magicians. From its beginnings as a device for entertainment and wonder, the camera obscura also became known as a philosopher’s toy for ontological speculation. More sophisticated projection devices increasingly incorporated mirrors and lenses, offering a demonstration in optics for those so inclined. By the seventeenth century a court culture arose around the Kunstkammer in Dresden, a repository of optical instruments. Visitors engaged with the instruments, making no distinction between ludus, social play, and lusus, intellectual play. The principles on which these objects and devices were based soon influenced the realm of optical understanding.

Room-size camera obscuras in both Prague and Dresden enticed visitors to enter darkened chambers where they encountered phantasmagoria and natural wonders, which they perceived as objects floating in the air. That medieval interpretation of images as “objects hovering in the air” would soon be redefined by Johannes Kepler. After visiting the Kunstkammer in Dresden in 1604, Kepler set to work investigating the optical principles behind the camera obscura, with its configuration of lenses and mirrors, and developed mathematical formulas to define the optical properties of lenses.

There is no question that the camera obscura exerted a powerful influence on European culture in the seventeenth century. And among those who observed it for the first time, some reported a transformative experience. Constantijn Huygens, a Dutch poet and composer who later became secretary to William II of Orange, described the camera obscura he encountered on a trip to London in 1622:

It is not possible to describe for you the beauty of it in words: all painting is dead in comparison, for here is life itself, or something more noble, if only it did not lack words. Figure, contour, and movement come together therein, in a way that is altogether pleasing.

The camera obscura harnessed the properties of light, lenses, and mirrors to project scenes in real time before the observer. But while it could transmit images of the world with startling clarity, it could not fix them permanently. These images were evanescent, seen only with the aid of an optical instrument, either by looking through it or seeing the image projected from it. Whereas a photograph is an isolated, discreet fragment, the obscura projects a transient, nondiscriminating continuity. Far from being a weakness, this evanescence magnifies their importance; the viewer perceived these images as alive, and their immediacy made them feel more precious.

Long before the development of chemical photography, the camera obscura invited the viewer into the direct ex­perience of image formation. Inside of a room-size camera obscura, where light, mirrors, and lenses interact, images appeared alive, unfolding in real time right before the viewer’s eyes, evading capture in any permanent state. Unlike modern photographs, they could not be commodified or sold. One medium is alive, performative, and theatrical, while the other is static, as soon as the image is fixed and permanent.

For several centuries, all of the pieces were in place for the development of photography. Cameras already existed, and the science of optics had made significant advances in the use of lenses. To make images permanent, all that was missing was the requisite knowledge of chemistry. When the first photograph was introduced in 1826 or 1827, Nicéphore Niépce’s View from the Window at Le Gras, it was heralded as a modern marvel, followed by the introduction of the daguerreotype in 1839. With Niépce’s innovation, the pre-chemical era of photography officially came to a close. But the photograph, a fixed, static image, could never offer the immediacy of images seen through a camera obscura, or match their shimmering, ephemeral beauty.

Stephen Berkman : Predicting the Past, Zohar Studios : The Lost Years