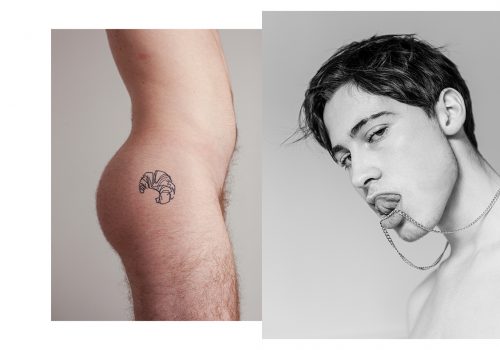 This is the world upside down, as our grandmothers said.
Except that this time, they are not wrong.
On Facebook, Insta, these so-called social networks (but rather: modern Pandora’s boxes), we no longer have the right to expose the truth of a body.
Part of a breast, part of a sex – and that’s the blacklist!
It looks like in 1550, after the Council of Trent.
Terrified by Protestantism, which denounced the debauchery of Rome, the Vatican chose “virtuous popes” whose first coup was to wage war on the penis.
[The vice must be cut at the root.]
Pius IV therefore commissioned the painter Volterra – trained however by Michelangelo – to make the change, covering with a vine leaf all the sexes of the Sistine chapel.
For punishment, history will call him braghetonne (the panty maker).
Seen from today, all this seems hypocritical.
But has the era changed? The question needs to be asked. [As for the “debauchery” of the clergy, Martel without Sodoma testifies to a certain … fixity.]
Stop. Facebook (our modern Church) lights up in the same light: everything is allowed, shared, spread out, except the most innocent of sins: sensuality.
Verbal abuse, racial hatred, racism, conspiracy: welcome – as long as you don’t show a butt! [MM. Trump & Putin don’t regret coming.] The height of ridicule: Fox News going as far as blurring Les Demoiselles d’Avignon breasts. In case three cubist boobs made the Americans even sadder.
OK Google. Let’s examine the genesis of Puritanism: once the forbidden fruit had been crunched, Adam and Eve’s eyes opened, says the Bible, and they knew they were naked. As a result: what we blame for a body without a veil is our own desire that is revealed.
Pause. What does it mean? Just follow the thread: that violence is desirable, and desire deplorable. (Since we exhibit one – and the other bothers us.)
The “boys rule”, moreover, teaches about this fear.
An apathetic cock in a public space: is ok.
But a stiff dick: help, help! [The Bible flourishes: by its incarnation, it is desire, again, that we send back to prison.]

But back to Gizard.

It turns out – thank God – there are still artists who love the bizarre. [I mean the normal: you will have understood me.]

And what is normal for an artist?

Either represent, in parts or in whole, his punctum.

(Without apologizing the next day for an erratum.)

Cut. This digital self-righteousness will however have a happy consequence.

Yes. Hallelujah: on paper, we have almost all the rights.

[As if only the pixel was worth the fight.]

We will not complain.

And let’s dive into these treasures, which one would think non-human,

despite the flesh, so much they inspire stupor & melancholy together. (Stupor of beauty, condensed at this point. Melancholy not to taste it.)

We will touch with the eyes – which become hands when they scan the fire. There remains the aggressiveness of desire-king.

These bad and sweet pupils at the same time.

Stop. Let’s eat the book … without being ashamed of it.