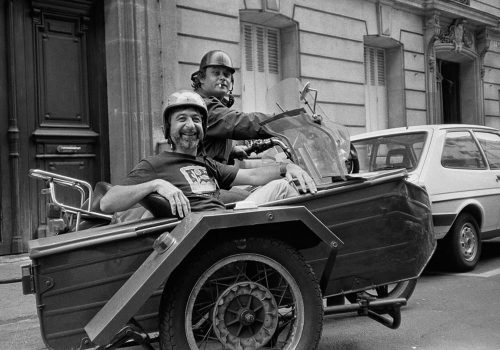 They tell us about a time that people under twenty do not know. Stars and celebrities whose names have raised – and sometimes still raise – the crowds. Two photographers who grew up in the cradle of the Gamma agency revisited their archives. Nostalgia for older people, curiosity for young people: two lessons of photojournalism.

The eldest is Hugues Vassal, 86 years old born in Boulogne Billancourt. He was one of the four founders of the legendary Gamma news agency, but it was with the weekly France Dimanche that he started in the 1950s at a time when the stars did not have press attaché and welcomed the young photographers to their table when they seemed to be hungry.

The youngest 84-year-old Jean-Pierre Laffont, born in Algiers, began at Reporters Associés, a small agency founded by Wladimir Rychkoff, known as Lova de Vaysse, son of a Russian prince who emigrated to Paris. He did not stay there for a long time because people were rarely paid, but he met Monique Kouznetzoff and Jean Monteux, whom he will meet again at Gamma when Hubert Henrotte asked his comrade from the Vevey’s photo school to join the young agency.

Vassal, Laffont, these two hardly ever met. On the one hand, Jean-Pierre Laffont went to the USA and on the other hand a split of Gamma’s associates will led to the creation of a competing agency: Sygma.

Hugues Vassal stayed with Gamma with Raymond Depardon and Jean Monteux. Jean-Pierre Laffont followed Hubert Henrotte and Monique Kouznetzoff in the new agency. Everything is said about the men but success will come from women!

Edith Piaf will save Vassal. She recognised him as a guy who did not have much in his pockets. She opened her door and introduce him to her artist friends. She opens the door of the world of singing and cinema. He hit the town meeting, Arletty, Maurice Chevalier, Line Renaud, Françoise Hardy, Serge Gainsbourg, Michel Simon, Jacques Brel, Joe Dassin, Johnny and Sylvie, George Moustaki, Brigitte Bardot etc. We cannot name them all, but I do not forget Mireille Mathieu who gave Vassal the money to buy his shares of the Gamma company. I cannot forget either Hugues Aufray who wrote the preface to the book of the little friend he met in 1941 at the college of Sorèze in the Tarn.

The woman who played a big role in the life of Jean-Pierre Laffont is his: Eliane Lucotte who is not yet Ms Laffont when Jean-Pierre went to the United States. Eliane arrived there by a roundabout way. She participated in a Tierra del Fuego-Alaska raid with a Renault 4L. The epic adventure was successful and ended triumphantly in New York. “I knew it was where I wanted to live,” she said. Hubert Henrotte asked her to work for Gamma. She knew nothing about photography except what Jean-Pierre told her, but she loved adventure and had a lot of nerve. She became the patron saint of “French” photojournalism in New York.

In Paris, Gamma, Monique Kouznetzoff had taken her marks. She soon married Hubert Henrotte. Next to Hugues Vassal came other photographers very interested in the showbiz, which started to pay off. For Vassal the competition within the agency was tough.

With the creation of Sygma, Monique Kouznetzoff became the boss of what was called the showbiz “and soon the” people “. Meanwhile, the stars have become stars surrounded by press attachés, producers with whom it is necessary to negotiate. Monique understood everything. She gave the “final cut” to the stars for the photographic appointments and had her hour of glory. Especially since she was friendly with Eliane Laffont! The two women made a hit for almost three decades.

Jean-Pierre Laffont, whose motto is to photograph everything from prisons to ruined peasants, knew New York inside out. He was at home there and received the French stars coming thru: Charles Aznavour, Maurice Chevalier, Brigitte Bardot, Françoise Hardy, Demois Roussos, Michel Simon, Robert Charlebois, etc. And, in another register, lets not forget Andre Malraux, Eric Tabarly, Marguerite Yourcenar etc. Jean-Pierre Laffont was a hard worker eager to meet them all and capture their image. But he had an asset that served him his entire career: three pairs of eyes, his own first, but also for editing those of Eliane and Monique.

These two books, released a few weeks apart, fascinated me. They deal with practically the same subject but at two different but overlapping times. Certainly we find in Vassal and Laffont sometimes the same singers, the same actors, but the shooting is totally different.

Black and white completely dominates the production of Hugues Vassal which dates from the 50s and 60s for the most part. The color appears in Jean-Pierre Laffont in the 70s. With Hugues Vassal we are in the intimacy of the stars, with Jean-Pierre Laffont we are at a rendez-vous with the stars. Between Sylvie kissing Johnny and Sylvie Vartan jogging in New York, there is a decade of gap and two women who have learned to “manage” the image of the stars.

I can only say one thing: buy both! They are reasonably priced and they are two interesting lessons on photojournalism of the second half of the twentieth century.