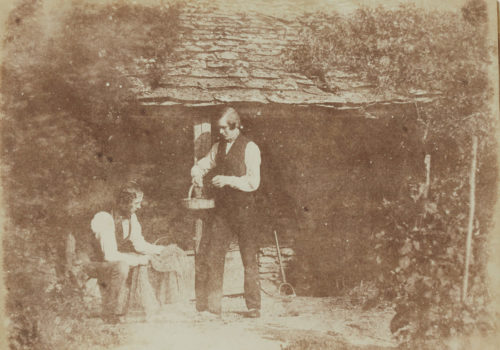 An exceptional trove of nearly 200 early photographs by William Henry Fox Talbot, the father of the medium, quadrupled its pre-auction high estimate to achieve $1,956,000 this week at Sotheby’s, a new auction record for the artist. Gifted by the photographer to his sister and remaining in the family since, the collection made its auction debut as a highlight of Sotheby’s 50 Masterworks to Celebrate 50 Years of Sotheby’s Photographs sale, chased by six determined online bidders to set a new artist record for Talbot, and a new benchmark for a work of 19th century photography at auction.

Emily Bierman, Sotheby’s Head of Photographs in New York, commented, “This record-shattering sale is a true celebration of the birth of photography – the most inventive and beautiful artistic medium of our time.  The fierce competition between bidders in Europe, America, and Asia demonstrates the enormous appetite among a broad base of collectors.  After 50 years of traditional auctions of Photographs at Sotheby’s, bidding on this landmark collection of 19th century photographs was conducted entirely online – a resounding confirmation that we are indeed in a new, exciting, digital era.  For our entire team, the experience has been nothing short of a privilege that we will forever cherish.”

An early pioneer of the medium and recognized from the start for his supreme artistic capabilities, Talbot’s contributions to photography were critical to its development as an artistic and scientific medium.  Gifted by the photographer to his sister, Henrietta Horatia Maria Gaisford (née Feilding) in the 1840s, and passed down through the family, the collection is comprised of loose photographs, personal albums, fascicles of The Pencil of Nature, and a complete Sun Pictures in Scotland. It is arguably the most important lot of 19th century photographs to have ever come to market, with nothing nearing its scale or scope ever having appeared at auction before.