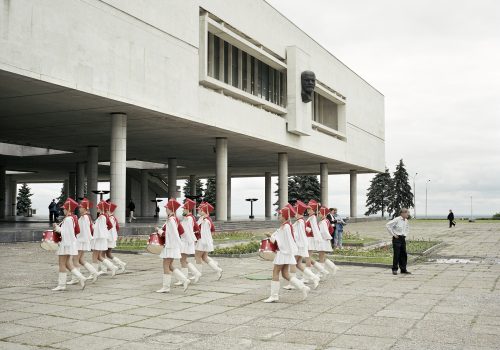 Flowers Gallery presents an exhibition by British photographer Simon Roberts, bringing together works from his extended photographic surveys of Russia and Britain produced over a period of 15 years.

Simon Roberts is known for his major bodies of work, We English, Pierdom, and Merrie Albion, which together comprise one of the most significant contemporary photographic studies of Britain since the new color documentary photography of the 1980s. His earlier series Motherland remains one of the most extensive, comprehensive photographic accounts of Russia by a Western photographer. Presented together in this exhibition, Homeland explores Roberts’ critical reflection on the relationship between contemporary national identity and place, and his ongoing investigation of what draws people together within a particular landscape.

Between 2004 and 2005 Roberts traveled to more than 200 locations across Russia to produce the book Motherland (2007), an exploration of the relationship between landscape and Russian identity. His photographic studies explored ideas of Russia’s ‘modest beauty’1 and presented a diverse view of the vast country, encapsulating the optimism and national pride derived from the Russian sense of place.

On his return to Britain, Roberts began to examine the British relationship to the idea of homeland, which he came to define as a sense of longing sustained by “a range of archetypal images held in the mind”. The resulting photographs, which were produced over a decade (2007-2017), adopt a historical, rather than fleeting, gaze. Exploring social practices and customs linked to the British landscape, as well as some of the economic and political theater that has helped define recent history, his large-scale photographs reflect on the nature of shared histories and communal experiences.

Critically conflating the traditional genre of landscape with social documentary, Roberts typically positions the camera at a deliberate distance and elevation from the most obvious scenic viewpoint, focusing instead on the sidelines or peripheral spaces, rewarding the viewer’s closer scrutiny of the scene with subtle actions and gestures taking place off-center. Paradoxically theatrical and ordinary, Roberts’ images reach beyond the news headlines relating to ‘how we are’ in our present societies and excavate the breadth of diverse individual experience making up a national identity.