Simon Faithfull : Memories From The Future 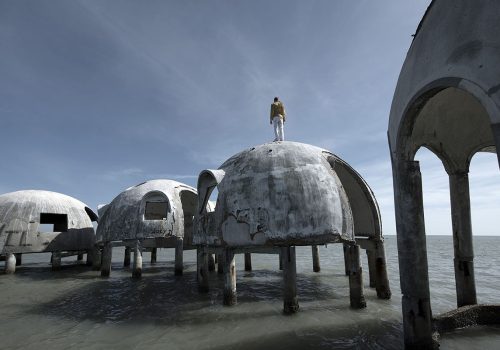 This new exhibition by Simon Faithfull at the Polaris Gallery, will mainly present Reconstitution for a Future Scenario 2: Cap Romano video and photographs in which, stranded on the half-submerged ruins of a futuristic “Dome Home”, a character is haunted by memories of a house before its foundations were washed away by a series of hurricanes.The work was done in actual ruins off the coast of Florida – a luxury summer house built by a petroleum engineer in 1979, but Destroyed by Hurricane Andrew in 1992. Other hurricanes eroded the coastline and destabilized the foundation of the house until in 2013 the Sand Island itself was submerged. The remaining domes are still visible above the water, but gradually collapsed into the ocean. What was the land 20 years ago is now the sea.

Born in 1965 in England, Simon Faithfull studied at Central Saint Martins College of Art and Design in London and then at the University of Reading. Influenced by his travels and by Land Art, Simon Faithfull has developed a multidisciplinary practice combining performance, video, photography, and writing.

His photographic and video works are considered as traces of his performances or his physical experiences (often trying) worthy of the first travelers, adventurers. Using the terrestrial globe as material to sculpt his films, and to question the limits of terrestrial space and the sky, but also to question the place of man, and of course that of the artist. Thus, based on proto-scientific experiments (the artist is moreover often advised in his projects by the scientists themselves), the scope and interest of which are far from the constraints of innovation and result, Simon Faithfull gives our world as well as his photographs a poetic and philosophical dimension of science. It also allows us to question our near future, pointing out, like a Buster Keaton of art, our flaws and mistakes.

Simon Faithfull : Memories From The Future