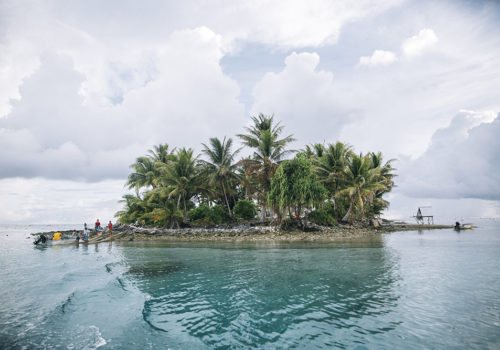 Warm Waters is a long-term photographic project, investigating the effects of climate change on the nature and people of communities living in the Pacific and Arctic regions. Since 2013, Vlad Sokhin has traveled from the northernmost tip of the United States in Point Barrow, Alaska, to the remote outposts of New Zealand, covering 18 countries and territories, to collect visual evidence of the consequences of the climate crisis.

Many scientists and researchers agree today that climate change is caused not only by natural events but also by increased human activity. The more we have overloaded nature, the more disbalanced it has become. Warm Waters opens a window onto tiny islands, remote coastal villages and their inhabitants who experience firsthand the harsh impact of a changing climate, like three super cyclones that hit Vanuatu, Tuvalu, Fiji, Northern Mariana Islands, and the Federated States of Micronesia in 2015-2016.

It also shows how coastal erosion and permafrost melting ruins indigenous towns and villages in Alaska and the Russian Kamchatka Peninsula.

For many people in the Pacific, ‘climate change’ is not just a catchphrase, it is a reality. From rising sea levels, super cyclones, weather pattern changes, and coastal erosion to permafrost thawing, coral bleaching, deforestation, animal migration pattern changes, and disrupted hunting and fishing, the sustainable ways of life for many areas of the Pacific, the largest region on our planet, are in great danger. —Vlad Sokhin

The photographs in this book are deliberately arranged by tonal narrative, not geography. You may see an image of boat captains drinking vodka during a storm in the Russian Far East beside an image of a sinking cemetery from the Marshall Islands. This causes the compartmentalisation of ‘region’ and ‘territory’ to disappear and highlights the understanding that climate change is global. No matter where you are, you can and will likely be affected. Images are a universal language and so the photographs themselves lead the narrative. Journalistic captions can be found at the end of the book.

As you journey through ‘Warm Waters’, look not just through the lens of the photographer, but also through the eyes of those who live and experience climate crisis on a daily basis. This is a vehicle for meeting the corners of the planet and the people who live there. These are our neighbours. —Vlad Sokhin