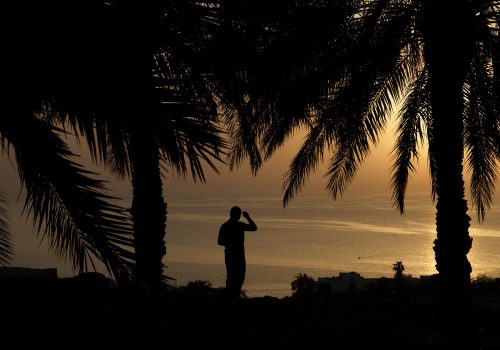 States close to the Persian Gulf are famous for stunning building projects like Burj Khalifa in Dubai, Abu Dhabi’s Louvre and the 2022 World Cup Stadium in Doha. Soon, the Jeddah Tower in Saudi Arabia will eclipse Burj Khalifa as the tallest building in the world and countless less prestigious constructs are in various stages of construction in this region of the world.

When Ryan Debolski came to Oman, after being awarded a Fulbright Fellowship to research abroad, he found himself connecting with and photographing the kind of people who build these iconic structures. Not the architects and building firms who capitalize from the kudos but the migrant workers from Asian and African countries who handle the materials and machines that fabricate award-winning constructs.

The exploitative conditions of the migrant workers’ existence are well documented: passports confiscated; cramped accommodation; poor wages for long shifts in blistering heat. In Like, Debolski has found one way for the language of photography to express the data of human rights’ reports and a state that Jason Koxvold, in his incisive afterword to Like, calls ‘capital and exploitation at the neoliberal frontier’.

Debolski, perhaps realizing that an overtly documentary approach risks being reductionist, does not photograph punitive work conditions. He chooses instead to come at the subject from the side, creating spaces for the unveiling of exploitation by picturing relationships between hegemony, agency and landscape.

One such space is a literal one: expanses of beach where migrants come to escape from their labour, the heat and the company-run shanty towns where they live outside of work hours. They manage their own fun, free of the algorithms that render them disposable commodities worth transporting from foreign lands. Instead of vanity projects for the rich they construct forms of play, the sort that children enjoy on a trip to the seaside. Sometimes, posing as if for a fashion shoot, there is a homoerotic element to the photographs.

Koxvold draws a link between Seurat’s Bathers at Asnières and Debolski’s pictures of workers on a beach. Both depict unselfconscious, working-class men at leisure but while Seurat’s bathers remain solitary figures, absorbed in themselves, Debolski’s are socially engaged with one another when not in pensive mood. The painter juxtaposes the industrial buildings of Clichy and the bathers in one canvas but the photographer separates the workers from the industry that employs them. The nature of the migrants’ employment has its visual presence elsewhere, a different pictorial space made up of a physical environment and the ephemera of building projects that transform elements of that environment.

This other space is constituted by raw materials – rock, concrete, bricks and sand – and parts of the related infrastructure like cranes, pylons, new roads and dump trucks. They appear as segments of a profit-making jigsaw that a proletariat put together to form shiny edifices that they will never inhabit.

There is a third space in Like, white gaps beneath or by the side of the photographs, and sometimes this is filled with excerpts from messaging-app texts between the photographer (‘I kept the all the information we shared even after their numbers and sim cards had been deactivated’) and the migrant workers. Debolski shares his photos, arranges meetings and exchanges news. The texts are glimpses into lives of men separated from their families and homes, trying to make the best of a situation that they know is dehumanizing.

One photo, a snake on the sand approaching or maybe escaping from a plastic bottle, can be looked at as encapsulating Debolski’s project. The frontier-breaching serpent of neoliberalism is at work in Oman, a place of natural beauty – like the Garden of Eden.

Like by Ryan Debolski, is published by Gnomic Book.