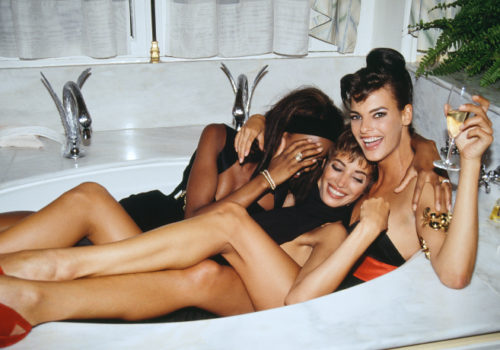 For the first time in Russia, Moscow Museum of Modern Art presents a solo exhibition of American photographer Roxanne Lowit. The exhibition is part of the parallel program of the 6th Moscow International Festival Fashion and Style in Photography 2011.

After three decades of shooting, Roxanne Lowit created the unique backstage ambiance and changed fashion photography forever, having become as much a celebrity as those she photographed. Roxanne has received a great number of awards, and for many photographers and fans of her talent, she has evolved into a unique style icon.

Lowit started taking pictures in the late 70s with her Kodak 110 Instamatic, photographing her own designs at New York fashion shows. She was soon covering all designers in Paris where her friends – models like Jerry Hall – would sneak her backstage. It was there that she found her place (and career) in fashion. “For me, that’s where it was happening,” she says.

Lowit did not go to school to become a photographer. She graduated from the Fashion Institute of Technology (FIT) in New York with a degree in art history and textile design. It was during her successful career as textile designer that she realized something: “I painted and there were people whom I wanted to sit for me but who had no time, so I started taking pictures of them. I liked the opportunity of getting instant images, so I traded in my paintbrushes for a camera.”

Visual artist Ja’bagh Kaghado, who started his career in photography assisting Roxanne Lowit for many years in NYC, Paris, and London, will be the special guest collaborator at Roxanne Lowit’s exhibition in Moscow. Ja’bagh will be showing some new images made specially for the show.

Until May 15
Moscow Museum of Modern Art
9 Tverskoy Boulevard