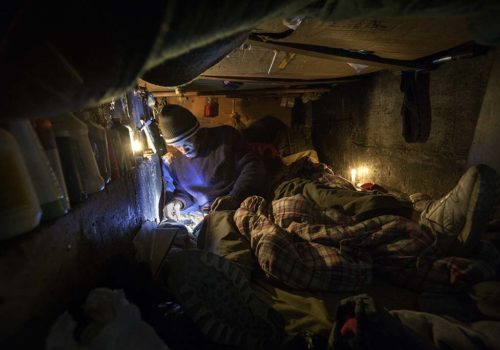 FotoEvidence announces that New Zealand photojournalist Robin Hammond has been granted the 2013 FotoEvidence Book Award. Finalists are : Andrea Reese, Jon Lowenstein, Massimo Berruti and Fabio Bucciarell. The annual award recognizes a photographer whose work demonstrates courage and commitment in the pursuit of social justice. FotoEvidence will publish Condemned, a body of work shot over 2 years in 7 countries that documents the mistreatment of the mentally ill in Africa.

The 2013 FotoEvidence Book Award brought projects from Africa, Asia, Europe and the Americas, documenting assaults on human dignity from around the world. There is no shortage of people living under conditions of great injustice but the work submitted for the 2013 FotoEvidence Book Award shows that dedicated photographers everywhere are working to bring this to light and inspire change. We are proud to publish and disseminate the selected projects, which we feel demonstrate the courage and commitment of documentary photographers in pursuit of social justice.

The treatment of the mentally ill in Africa; the problem of homelessness in the United States; dysfunction, corruption and poverty in Pakistan; massive Central American immigration through Mexico to the United States and back; and the Syrian civil war: challenges to justice that may seem intractable. Still, as 2013 FotoEvidence jury member Maggie Steber has said, “Photographers are driven to cover these issues because they never go away. The challenge before us…is to make people stop and think and realize that very fact: these issues do not go away. But photographers are eternal optimists… we just don’t give up. Photographers may not be heroes but we can make heroic images and a heroic effort to make the world a better place.”
An exhibit of all the projects will be mounted in New York at the VII Photo Agency Gallery in October of 2013.

Condemned exposes the systematic violation of the human rights of the mentally ill in African nations, in the aftermath of conflict and crisis. Confined, abused and forgotten by most of society, the mentally ill can be found in prisons or in chains at holy sites or hospitals.

Shot in 7 countries, the black and white photographs of “Condemned” capture the bleak conditions in which the mentally ill live and take the viewer painfully close to the intimate suffering of the mentally ill. It gives voice to a voiceless group of people, who have had their complaints of abuse and calls for freedom dismissed as the rants of mad people.

With “Condemned” Hammond intends to alert the world to the extreme injustice of the treatment of the mentally ill in these societies, so ignorance will no longer be able to be uses as an excuse for inaction.”

Robin Hammond:
The winner of the 2013 FotoEvidence Book award is a 37-year-old freelance photojournalist born in New Zealand. He has been part of the photo agency Panos Pictures since 2007.
The winner of four Amnesty International awards for Human Rights journalism, Robin has dedicated his career to documenting human rights and development issues around the world, especially in sub-Saharan Africa.
In 2011, Hammond won the Carmignac Gestion Photojournalism Award which allowed him to document in Zimbabwe for four months. Actes Sud published a book of the photos to coincide with an exhibition of the work in Paris in November 2012.
His long term project on mental health, Condemned, was exhibited in September 2012 at the photojournalism festival Visa Pour l’Image.
After spending time in Japan, the United Kingdom and South Africa, Robin Hammond currently lives in Paris. He contributes to many international newspapers and magazines including National Geographic, Time Magazine, Newsweek, The Sunday Times Magazine, The New York Times, and Polka. He also works regularly with various non-governmental organizations.