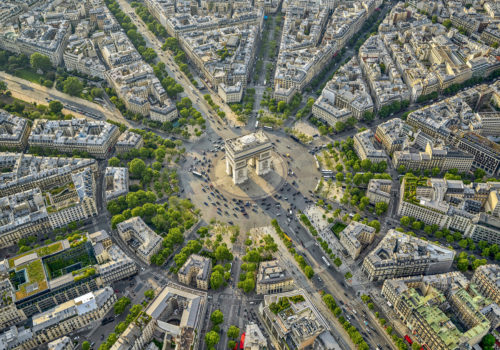 Paris is, without question, one of the most photographed cities in the world, but Jeffrey Milstein’s aerial vistas provide an unparalleled visual experience of the city from heretofore unimaginable angles.

Shooting with the newest high-resolution medium-format professional cameras while leaning out of doorless helicopters, Milstein captures the highly detailed, iconic, straight-down images that set his work apart. Permission to shoot over Paris is all but impossible to obtain, but Milstein was granted this rare consent based on the extraordinary quality of his work.

Mostly taken late on summer afternoons when the sun is low and golden, Milstein also captures Paris in rare, glittering night shots, “Enabling”, as Corbusier once wrote, “human beings to glance down like Gods upon the worlds they have made.”

In a way that is impossible from street level, or even from the tops of landmarks like the Eiffel Tower, you can see the old neighborhoods of Montmartre and Montparnasse; iconic monuments like Notre Dame, the Arc de Triomphe, or Invalides; and modern Paris like La Défense, or the newer neighborhoods around the Bibliothèque Nationale and how they all relate to each other in the big picture. As a bonus, there is a portfolio of images of the gardens and buildings of Versailles where Milstein shot in both summer and fall and he even got the powers that be to turn the lights on at Versailles for rare and dazzling night-time captures.

An informative thumbnail index is included in the book, providing a description of the buildings and landmarks featured in each image, and their historical context and importance. Milstein’s distinctive style and fearless approach result in a unique perspective and, for anyone who loves Paris, this ravishing book will be an endlessly fascinating way to study the city.

About the Author: Jeffrey Milstein is a photographer, architect, and pilot. His photographs have been exhibited and collected throughout the United States and Europe and have been featured in publications such as the New York Times, Time, Esquire, Fortune, Harper’s, Vanity Fair, GEO, GQ, Paris Match, Liberation, Graphis, and Die Zeit. He has won numerous awards, including Graphis Gold Awards, and has been featured on CNN and CBS. His work is in the collections of museums including the Scottish National Galleries, LACMA, George Eastman Museum, Musée de l’Elysée, Portland Art Museum, Akron Art Museum, and the Smithsonian National Air and Space Museum, where he had a yearlong solo show. His other books include LA NY, Aircraft, Cuba, and Small Dreams. He is represented by Kopeikin Gallery in Los Angeles, Benrubi Gallery in New York, Robert Klein Gallery in Boston, Bau-Xi Gallery in Canada, and ARTITLED contemporary in Europe. He lives in Woodstock, New York. James Crawford is an award-winning writer, publisher, and broadcaster. He has explored aerial photography and architectural heritage in several books and films. Robert Morton has edited and published art and photography books for more than 60 years, serving as editor in chief and director of special projects for three major publishers.

Paris From The Air