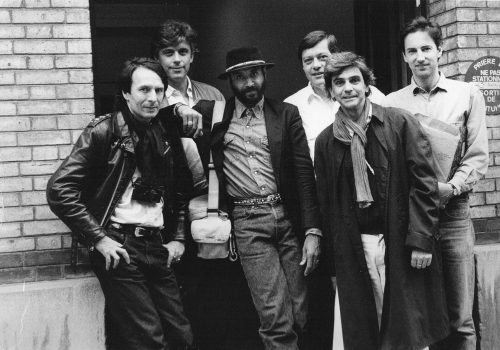 An email received from Bernard Plossu. A sad email with these words and this photo!

“Jean Philippe Reverdot has just left us. Many of us are saddened because he was one of the essential photographers of an era, and he was really nice ….!

I think I met him when Bernard Lamarche Vadel had made the Sideration exhibition on the French photographic workshop. All this goes back to the late 80s, early 90s, with friends like De Fenoyl, Yves Guillot, Magdi Senadji, François Sagnes, Michel Dieuzaide, Pierre Vallet, Jean Rault and many others.

He was very close to the group of Lamarche Vadel, who became for him a close friend and contributed fully to make his work known.

Our first meeting was marked for me by the fact that he had gone in Yemen to Al  Mukalla, a coastal town there where nobody was going, and where I dreamed of going! And I understood that I was dealing with a real traveler.

His book KURNA (Marval editions), a very original vision of Egypt, was the proof. Traveler certainly, but also traveler in the image: all his following photographs and books were dedicated to the research of the photographic language, with, towards the moment when he stopped publishing, more and more dark photos.

It was he who introduced us, Françoise (Nunez) and I, to Patrick Le Bescont, who launched the Filigranes editions, with wooden book profiles at the time: Reverdot had this great generosity in sharing friendships, which is a character trait open to the essential world. No negative wave, he knew how to love. He was also a big part of Marval’s editorial adventure, hence this photograph of an incredible magnificent meeting around Marchand on the ground floor of his office, with Alain Dister, Jean Philippe, Stanley Greene , Yves Marie Marchand, myself, and Stuart Alexander.

I unfortunately no longer know who took the photo … I apologize. For all of his many friends, I know he will be very much missed, too …. “.