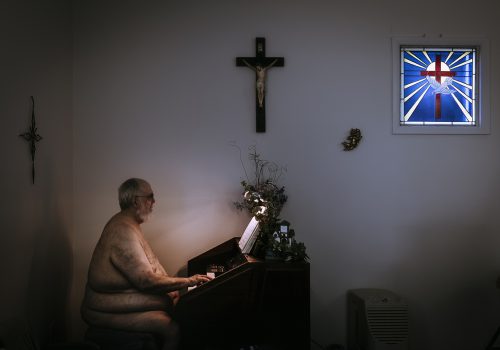 Cyril Abad grew up in a non-practicing Catholic family environment and, after having half-heartedly validated certain stages of the Christian “curriculum”, experienced a form of emancipation. Despite everything, the religious question has always aroused his curiosity. In 2016, while trying to find new ideas for reporting, he plunged back into reading Douglas Kennedy’s documentary story, In god’country published in 1993, a real mocking immersion in the world of Christian fundamentalism along the Bible Belt, in southern United States.

When he walks the streets of Tenderloin, he is looking for C. Card, the looser detective, an unusual character in Richard Brautigan’s A Private in Babylon, and when he walks under the humid and fragrant foliage of the Appalachian forests. , that’s because Ron Rash’s words got him there. At the origin of Cyril Abad’s reporting, there is always an American author accompanied by his stories that shape the photographer’s irrepressible attraction to a territory.

When Donald Trump was elected President of the United States in November 2016, a New York Times infographic revealed the overwhelming vote of evangelists. This component which resonates perfectly with the text of Douglas Kennedy gave birth to the idea of ​​this project …

Six months later, Cyril Abad embarked for the “Bible Belt”, with the idea of ​​making the first four reportages in a series of ten. It  eventually took him three years to complete all the stories. In god we trust, presents seven of these reportages which, after reflection, suffice to delimit – without any redundancy – the framework of Cyril Abad’s very personal vision on the question of religion in the United States. Drive-in or naturist churches, amusement parks, cross bikes, tiny mobile churches or even non-denominational churches are all “cults” which, in a desire for proselytizing expansion, obey the same rules as multinationals in perpetual quest for market.

Cyril Abad has lived and worked in Paris as a freelance photographer for about ten years. After working as an advertising and fashion photographer, he began in 2012 to carry out documentary work with a unique and often offbeat look at the place of man in society. He regularly collaborates with the press magazines  thanks to original reportages treated with humor such as Blackpool, the Brexit holidays or The last dreamers. In 2016 he began a 3-year project on the original forms of religion in the United States, his favorite territory for work. This project called “In God we trust” offers a dissonant and offbeat vision of our contemporary societies. This project has been published numerous times in France and internationally and was exhibited in 2019 at Visa pour l’image.

Cyril Abad : In God We Trust