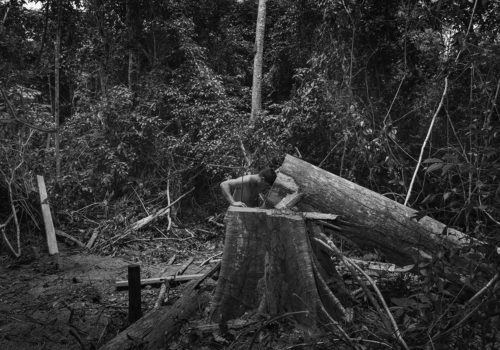 The only photography festival of the overseas departments, born 10 years ago, the ambition of the festival remains unaltered: to give author photography the place it deserves in the Guyanese cultural landscape, wether the artists exhibited benefit from an international status or that they distinguish themselves at the regional level.

An innovative festival, with each new edition, the Rencontres Photographiques de Guyane offer new ways of exhibiting as well as new discussion platforms around the image and photographic practice.

The Amazon is dying under the growing flames of our greed. As its forest gives way more and more, treasures of biodiversity and an irreplaceable human heritage vanish with it. Fires reach record levels in Brazil. In July 2019 alone, 2,254 square kilometers of forest vanished, almost the size of Luxembourg. Transposed to the world of football, Brazil’s national sport, this represents the disappearance of 670 football fields every 90 minutes, during a game. A game that is obviously loaded, the green team having no chance of winning against the blazing red. Everywhere arson and glowing fires dot the forest like tragic fireworks. This green holocaust is one of the major reasons for the climate crisis we are experiencing. Our very future is being blown up in smoke.

Through his photographs, Tommaso Protti testifies of this abused Amazonia: illegal gold mines voraciously gnawing at the underground, plant cemeteries where stranded trees become crosses, abject murders to steal a few acres of land or pinches of drugs, unsanitary favelas. devastated by fires, drinking, prostitution or cocaine delirium in tropical lowlands … The photographer took his camera to the most varied corners of the Amazon to capture uncompromising testimonies.

Powerful work, which won the prestigious Carmignac Prize in 2019.

Born in Italy in 1986, Tommaso Protti lives and works in São Paulo, Brazil.

He began his career as a photographer in 2011, after a degree in political science and international relations. Since then, he has devoted himself to his own projects, often spread over several years. His works have been exhibited at the Royal Albert Hall in London, at the Greenwich Heritage Center in Woolwich (United Kingdom), at the Benaki Museum in Athens (Greece), in Rome at the Museum of Contemporary Art (MACRo), in gallery 10b Photography and as part of the Fotoleggendo festival (Italy), the Rencontres d’Arles and the Bayeux-Calvados prize for war correspondents (France), the Belfast Photo festival (Ireland), the C40 Mayors Summit (Mexico), the 22nd United Nations Climate Change Conference (Marrakech, Morocco) or at the PARTE Contemporary Art Fair (São Paulo, Brazil).

His images have appeared in numerous newspapers and magazines, including The New York Times, The Wall Street Journal, Time, National Geographic, The New Yorker, The Guardian, The Independent, Le Monde and Il Corriere della Sera. He also works with international organizations such as the United Nations and is a member of Angustia Photo.

In partnership with the Carmignac Foundation.