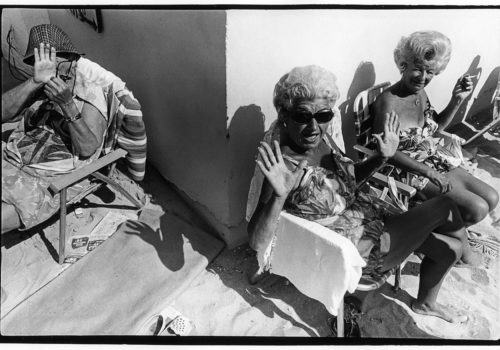 A new photography book of David Godlis’ 1970s Miami street photography will be published by Reel Art Press in November 2021. The photos are the result of a ten-day trip to Miami Beach, Florida taken by the then 22-year-old photography student. At the time, Godlis was excited to visit an area he had frequented a decade earlier as a child, and document its idiosyncrasies.

For a kid visiting in the 1950s and early 1960s, it was like going to Jewish Disneyland. Goodbye snow. Hello coconuts. And so, when I returned to Miami Beach in 1974, with a camera, all these memories of Florida came flowing back to me. As I tripped the shutter over and over, taking pictures on those beaches I had walked upon as a little kid, everything clicked. Pun intended.

He walked the streets all day, retracing his childhood steps through an area of art deco hotels and a Jewish retiree enclave on the expansive beaches facing the Atlantic Ocean. These retirees, all dressed up in their best beach outfits, would spend their days on loungers and lawn chairs, playing cards amid the sunshine and palm trees offering themselves as perfect subjects. The photographs are punctuated with humorous ear marks of the time, such as a sign reading ‘Impeach Nixon’, tiny and over manicured handbag dogs, ghastly diamante cat eye sunglasses, and the cornerstone of any 1970s retirement village – a drugstore offering discount blood pressure readings. Godlis captured these sun-drenched moments and surreal split-second instants in black and white film, creating over 60 rolls in just ten days.

Notably, there are two things Godlis didn’t quite realise at the time: firstly, he was capturing the end of era. The moment between the Miami he knew as a child and the now luxurious metropolis that stands in its place. The area he photographed in 1974 is now the infamous South Beach. Secondly, that he had unknowingly discovered his photographic voice and unique style as he captured strangers on the streets and boiling-hot beaches. He confesses being heavily influenced by Brassai’s immersive reportage of 1930s Paris, and inspired by Robert Frank, Diane Arbus, Gary Winogrand, and Lee Friedlander, but for the first time, on this trip, his distinctive voice emerged.

Whatever I did during those ten days in Miami Beach worked for me. I recognized that right away. And have been doing it ever since. Just two years later I was at CBGB photographing punks, doing the exact same thing.

This volume acts as an account of a vanished Miami Beach and an archive of the moment when Godlis found his visual style, becoming an incredible and era defining street photographer.

David GODLIS (born 1951 in New York City), is one of the most seasoned and important street photographers of his generation. The veteran artist picked up his first camera in 1970, becoming enamored with the street work of Robert Frank, Diane Arbus, Garry Winogrand, and Lee Friedlander, amongst others. GODLIS is most famous for his photographs of New York City’s punk scene in the mid-1970s, taken in the natural light of the Bowery with long handheld exposures outside the club CBGB. It was this technique that secured now-iconic grainy black and white photographs of 1970s punk bands including The Ramones, Television, Richard Hell, and Blondie, documented in his first book, History Is Made At Night. For nearly 50 years, GODLIS’ practice has also consisted of walking around the streets of first Boston and later New York City, shooting whatever catches his eye and framing everyday events with an acute sense of humor and pathos. His book Godlis Streets documents his best street photography from the 1970s and ’80s in a succinct celebration of New York’s and Boston’s past. From the late 1980s until today he has been the unofficial official photographer for the Film Society of Lincoln Center, and he has covered the New York Film Festival for the last 30 years. Meanwhile, he continues to document the streets of New York.