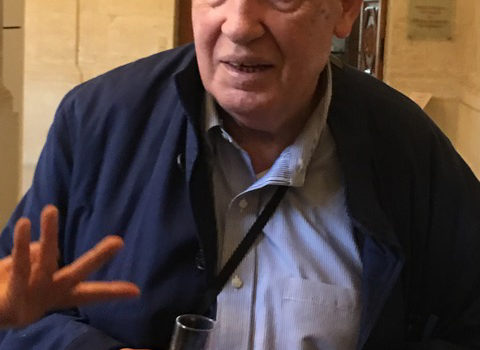 A column by JFC on the occasion of the opening of the exhibition of Raymond Depardon in the cloister of the Val de Grace, Museum of the Army Health Service, Monday, September 30, 2019.

A vernissage on a Monday is not common; moreover, it is a day of national mourning, President Chirac has left us. But Depardon in the Val de Grace represents for me a remarkable fact – which is not the opinion of Florence Parly, our Minister of Armies, who was represented by her Secretary of State Genevieve Darriueussecq. Too bad I wanted to talk to him about the International Center for Photojournalism, since we were in the souvenir photo …

During speeches of circumstance, Raymond Depardon was the most sensitive and the most human, he spoke about his childhood, his learning, the opportunity of starting to express himself photographically in the army, and of the comradeship of the conscripts of the contingent.

The idea of ​​reediting pictures dating from his military service in 1962-63 was not obvious and yet, under the costume of the twenty year old second class, already pierces the future very great photographer.

He is equipped with his Rolleiflex, with a wide-angle lens, which will allow him fifty years later to photograph President Hollande for his official portrait.

This exhibition, very well presented in the cloister of the institution magnificently restored, is full of charm and delicacy: the soldiers in actions are subtly presented by the benevolent framing in the exercise of their military functions. The square format gives extra soul to this set of situations, which does not exclude winks on the bistros and other places that have disappeared.

My only regret lies in the choice of black and white enlargements printed on Dibond, because photo prints on baryte paper could have joined the archives of the DPMA army, whereas there they are only tools of exposure without intrinsic value.

I invite you to discover until January 30, 2020, how an immense talent takes shape in a place steeped in history and rarely open to the public.