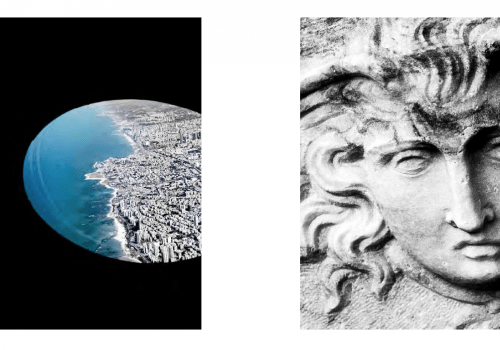 Ralph Gibson‘s new book published by Lustrum Press is a diptych portrayal of Israel, a land at once deeply modern and incredibly ancient.

The American photographer Ralph Gibson traveled throughout Israel and the surrounding region to create a portrait of a land where the past is vividly part of the present. He contrasts these in two-page spreads in which color and black-and-white images face one another: ancient language in a visual dialogue with contemporary human experience.

Martin Cohen invited Gibson to come to Israel for this project, in Gibson’s own words: ” My warmest thank you goes out to Marty Cohen for having proposed this endeavor. Without doubt this has been the rarest of commissions and my gratitude is for not only the opportunity afforded but also the confidence he manifested and encouraged. Marty approached me with this magnificent idea and provided the infrastructure as well as inspiring my efforts.”

Israel is essentially built out of limestone; calcaire. Soft and easy to saw into blocks at the quarry, it hardens with exposure to air. And thus speaks louder and stronger every thousand years or so. It becomes as permanent as time itself, an ineluctable and undefinable fact owned by man and loved by architects, engineers and clerics. This durability takes one back very far into time.

This explains how and why we are told “King David lived here” or “Jesus walked there.” and so on. The light is clarion, optical and of a Mediterranean hue. This ancient luminosity refracts into mythology and biblical wisdom. One feels positioned as a human being. I like to think that in the long life of a city each person on the street becomes their own personal archaeologist. While walking alone through the streets of Jerusalem I sensed my humanity for the first time ever.

The words carved into stone thousands of years ago or written on parchment in the ancient tomes reveal an early need for knowledge and expression. A chisel was at one time considered hi-tech. The knowledge of today continues to advance in the even higher-tech computer science and bio-technology labs where the best minds of the land pursue humanity’s ambitions.

Israel is the oldest and the youngest country in the world and struggles for survival from without and definition from within. The country is surrounded by enemies who want to drive her into the sea and confronted by its own citizens who challenge the nature of her statehood. Yet Israel is recognized by the free world as a miracle in our time. As the great composer Morton Feldman said, “Tragedy is what occurs when both parties are right.”

And what would the world be without the Jewish diaspora that spread intellect and culture like seeds around the entire planet?