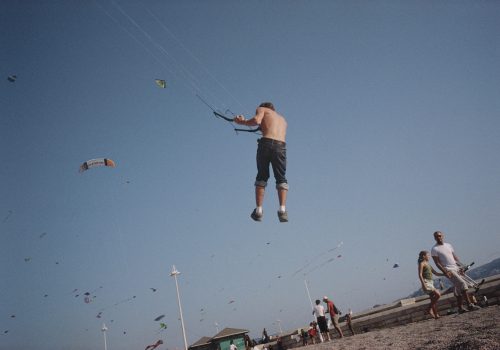 In a small village in Provence, where I’ve been going regularly for the past forty years, the mistral is a frequent guest. It rushes in from north-facing windows and small air vents. Bedroom doors are propped open by two-kilo cast-iron butcher weights. Inevitably someone forgets to put one in place, and the report reverberates throughout the house. Any number of ceramic bowls and carelessly placed glasses go crashing to the terra-cotta tile floors. My young niece stands in the entrance.  A gust of wind suddenly slams the heavy wooden door on her finger – a spray of red on the white plaster wall. Village kids, looking for amusement at night, take advantage of the mistral to muffle their monkey business. Loose shutters creak, chimneys howl, and nobody hears them.

The mistral is a gremlin wreaking havoc on our lives. It is everywhere. It is nowhere to be seen. People feel the wind without necessarily being aware of how it affects their lives. Anyone who has spent time in Provence is likely to have experienced the cold, dry wind that funnels down the Rhône Valley between the Alps and the Massif Central, gaining speed as it reaches the Mediterranean. Wind flows freely over borders. It cannot be harnessed like a river, depriving one country of a resource. Instead, it connects us. High pressure in the Bay of Biscay and low pressure in the Gulf of Genoa lead to a mistral that can extend all the way to the coast of Africa and high up into the troposphere.

As long as there have been inhabitants in Provence, they have endured the mistral. Archeologists have found evidence of prehistoric stone walls erected on the northwest side of fire pits that they believe were used as protection from the wind. Provençaux have many tales, myths, and sayings about the mistral. They maintain it lasts three, six, or nine days even though it regularly subsides after just one or two. They blame it for anything from migraines to crimes of passion.

By coincidence, Provence’s most famous poet, Frédéric Mistral, shares his name with its most famous wind. Almost every town and village in the area has a sign for a Mistral street, avenue, or café. So not only do Provençaux experience the mistral’s force as many as two hundred days a year, the word itself is inescapable.

Nineteenth-century painters were drawn to Provence by the crystal-clear air that follows a mistral, but for Vincent van Gogh the wind was a torment. During the eighteen months he lived in Arles and Saint-Rémy, he complained about it in more than forty letters. On days when the wind blasted him, he tried laying his canvas on the ground and kneeling to paint; he tried weighing down his canvas with rocks; he even drove stakes into the ground and secured his easel to them and to nearby trees. All too often his effort to work en plein air was stymied by the “devil mistral.”

If van Gogh and others could paint scenes of the mistral, I thought, why couldn’t I try to capture it in images? It was not the first time I tried to photograph the unseen. I was eight years old and playing outside when I looked up and was sure I saw God in the clouds. I ran inside, grabbed my mother’s camera and clicked off all twelve frames, my first photographs. When my mother brought back the prints from the drugstore, she was not at all happy to find an entire roll of sky, and I was disappointed God had proved so elusive.

By the late 1990’s, I was ready to try again. I set out to find evidence of the mistral and capture it in images. I went to a local library in Provence where a martinet of a librarian brought me books one at a time. I took notes from the dusty tomes, but I found very little to go on.   I started talking to neighbors, to farmers at the market, and to workers who labored outdoors. They could all describe how the mistral menaced them, but not in a way I could use visually. I ran into a local friend, André, who knew an old shepherd. Perhaps he could be of some help?

André and I drove up to a hamlet on the south side of Mont Ventoux. In a stone and ochre-colored stucco house set against the hillside, his shepherd friend described to me – in his Provençal tongue – how his father’s sheep were once lost on the mountain during a mistral, the sound of their bells carried away by the wind. The next morning, in a fierce mistral, I tried to photograph just such a scene. I drove up the mountain until the road ended, and I set out on foot looking for the shepherd’s son, but all I found was limestone scree and some dead leaves bolting past. I could hear his sheep’s bells clinking in the distance, but as I pursued the sound, it kept dancing away from me.

Chasing the wind became an obsession, often a frustrating one. When the mistral blew, I might drive an hour or two with a certain photograph in mind, only to arrive to sudden stillness. It felt like a game of you-can’t-catch-me. It reminded me of when I was a child and I used to sail with my father. As our spinnaker suddenly went limp, he would declare, “The wind is a fickle woman.”

Over time I began to notice signs of the mistral more and more. It was in the architecture. Provençal houses have traditionally been built with the wind in mind, not the sun. The northwest, windward side has few or no windows. The front door is always on the protected southern side of the house. You can tell when a house has been modernized—often by outsiders—because new, north-facing windows have been punched through without regard to the mistral’s force. In the Camargue, the marshy region at the mouth of the Rhône River, the traditional thatched cottages of the gardiens (herdsmen) are built with rounded lime-washed walls and slanting roofs facing at an angle to the prevailing mistral so that it flows around them. Iron belfries allow the wind to pass easily through them. Such iron-work campaniles are seen in almost every village and town of the region. If you plotted them on a map, it would show exactly where the mistral blows.

The Provençal landscape too reflects the effect of wind. It is a mosaic of vineyards, olive groves, wheat fields, and other plots separated by rows of cypress or poplars planted closely together as windbreaks. Mont Ventoux, also known as Mont Chauve (bald mountain), was once forested, but its trees were cut down for shipbuilding and charcoal production. The topsoil blew off, leaving a lunar landscape. Wind and rain eroded the chain of mountains known as the Dentelles de Montmirail so that they look like a lace border.

In agriculture and food production, the mistral can be useful. Winemakers are grateful when the mistral clears their vines of pests. It can help prevent rot. The combination of wind and sun aid in salt production in the Camargue. Even oyster cultivators benefit. In the Étang de Thau, high salinity leads to increased algae in the lagoon, so cultivators periodically pull their oysters onto racks to dry and kill the algae that robs them of oxygen. If there’s a mistral, the algae dries three times as fast.

In between other work, I occasionally made my way back to Provence from New York to continue this project, but the pictures came too slowly. It was impossible to time my trips to catch the wind. It was clear I needed to spend a long period of time there. After years of photographing newspaper and magazine assignments where I would drop into a location rarely longer than a week or two, I was ready to sink into one place until I knew it deeply.

My husband and I moved to the village and enrolled our son in the local school. Day after day, camera at my side, I drove the same narrow roads and walked the same circuit around our village. I got to know the area so well I knew individual plants—watched them lose their foliage as the days turned cold and felt the excitement of seeing their buds emerge as the days lengthened. Here is a rose from my garden after two days of mistral. There is a quince that survived gusts of 110 kilometer per hour. This wind-bowed sapling is going to make it. The mistral slowly revealed itself.

I started this story using Kodachrome film and digging through a small-town library, and I finished it using digital cameras and the Internet. It’s taken me a long time to put into words and images just this: The mistral an unseen force not only shapes the place where people live, but also who those people are.

To me, the French have a complicated relationship with the mistral. They have a reverence for tradition, rules, and order. Everything in its place. Then along comes the wind, the sacré mistral. They rail against it. They exclaim it’s a menace. Yet secretly they respect it. It’s liberté. Like a spirit, the mistral cannot be contained.