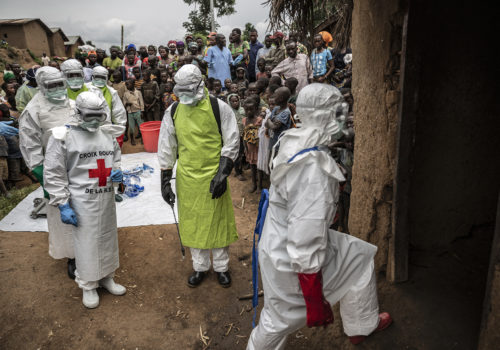 Carmignac Photojournalism Award, 11th edition -the Democratic Republic of Congo (DRC), the exhibition Finbarr O’Reilly: Congo in Conversation is presented on the gates of the Tour Saint-Jacques in Paris from January 6 to 27, 2021.

The 11th Carmignac Photojournalism Award – devoted to the Democratic Republic of Congo (DRC) – has been awarded to British-Canadian photographer Finbarr O’Reilly. His reporting began in January 2020, before the outbreak of the coronavirus pandemic and the containment of the planet. Due to the worsening health situation and the closing of the borders, a different operation has become necessary. Finbarr O’Reilly and the Award team – in close collaboration with the jury of the 11th edition – rethought the contours of this work in the face of the crisis.

The Carmignac Foundation is thus presenting “Congo in Conversation”, a collaborative report, produced with the contribution of local journalists and photographers, which documents the human, social and ecological challenges that the Congo faces in the time of Covid19. Based on a website created for the occasion and relayed on social networks, Congo in Conversation is a continuous and unprecedented flow of writings, photo reports and videos, which visitors can consult by theme and by contributor. With “Congo In Conversation”, the Carmignac Award offers these Congolese voices a platform to contribute to the global conversation, to jointly bear witness to the situation on the territory of this immense country, and to raise public awareness.

Finbarr O’Reilly, freelance photographer and multimedia journalist, is the author of a 2017 Penguin Random House en 2017, Shooting Ghosts, A U.S. Marine, a Combat Photographer, and Their Journey Back from War. Finbarr O’Reilly lived for 12 years in West and Central Africa and covered 20 years of conflict in Congo, Chad, Sudan, Afghanistan, Libya and Gaza. Chosen to make the images for the “Crossroads Ethiopia” exhibition around the 2019 Nobel Peace Prize winner Abiy Ahmed Ali, he is frequently published in the New York Times and his work has earned him numerous professional awards, including the first prize in the Portraits category of the World Press Photo Awards in 2019. He was also winner of the World Press Photo of the Year in 2006.

In 2009, faced with an unprecedented media and photojournalism crisis, Édouard Carmignac created the Carmignac Photojournalism Award to help photographers in the field. Directed by Emeric Glayse, the Carmignac Photo Journalism Award annually supports the production of an investigative photographic and journalistic report on human rights violations around the world and related environmental and geostrategic issues. Selected by an international jury, the laureate receives a grant of € 50,000, allowing him/her to produce a 6-month field report with the support of the Carmignac Foundation which, upon their return, finances a traveling exhibition and the publication of a monographic book.

“Congo in Conversation” is also a bilingual French-English monograph, co-edited by Reliefs Editions and the Carmignac Foundation.

The images are accompanied by a conversation with Mark Sealy, curator and Director of Autograph ABP in London, who is interested in the relationship between photography, race issues and human rights, Finbarr O’Reilly, and Emeric Glayse, Director of the Carmignac Photojournalism Award.

Exhibition on the gates of the Saint-Jacques tower, Paris

Blue Sky : 2020 En Foco Fellowship Exhibition : Johnnie Chatman : i forgot where we were…