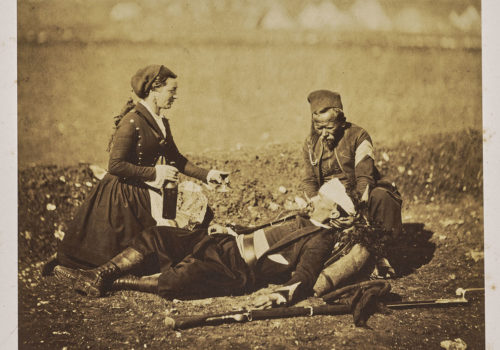 The British photographer brought back from this region close to the Black Sea a succession of photographs taken from March to June 1855. An exhibition unveils these images rarely exhibited at the Château de Chantilly.

You have to imagine what war reportage represented in that distant era. When the Royal Photography Society commissioned Roger Fenton (1819 – 1869) to take pictures of the Crimean War which began two years earlier and pitted Russia against a coalition made up of French (300,000 soldiers), Ottomans, British and men from the Kingdom of Sardinia, the members of the Society  knew that this enterprise was very risky and that the photographer would probably not bring back much, and could even perish on the spot as had already happened with others.

In fact, of the 700 glass plates Roger Fenton took with him,  he only returned with only half of them, and only about 280 photographs were found usable. When he landed in Crimea on March 7th, 1855, the photographer hoped to be able to survey the lands where the fighting was raging and bring back living tableaux which testified to the singular nature of this armed conflict, one of the first of the modern era, foreshadowing World War One where we no longer fought according to the seasons – but therefore even in the middle of winter! – and where they blithely digged large trenches from which rifle fire resounded.

Roger Fenton acquired a trailer in which he set up his photo lab, but very quickly he encountered the hostility of the Russians on the battlefield and the banner on which he wrote in large letter “Photo” was not be enough to protect him. He therefore quickly abandoned  this process to concentrate on a commission or portraits, those of the military leaders of the coalition, which were then used by official painters, themselves in connection with Queen Victoria. Portraits he made at dawn, around four or five in the morning, no doubt with a certain friendly complicity – he was obviously very much integrated into the circle of military commanders.

So we can see the faces of these leaders, some of whom lost their lives there like Lord Raglan, famous commander-in-chief of the English forces in the East who had a very good reputation with his men, Fenton noting in this regard: “The soldiers have nothing but good words to say about him.” Less glorious is the account we can read of the French Marshal Pélissier, responsible for a genocide in Algeria and whom the soldiers nicknamed “tin head” because he had a rather sharp attitude like a saber …

These portraits were collected by the Duke of Aumale to whom the Château de Chantilly belonged at that time and resonate today particularly in the very beautiful spaces of the garden level, near the wall portraits where Lully, La Bruyère and Racine, reinforcing the pomp we can lend them. It is indeed interesting to add to our reading the thought that Fenton sometimes staged what was going on in front of him for the purposes of political propaganda to mitigate the negative effects of war, as evidenced by a snapshot where a soldier is being treated by a nurse, visibly having only a scratch and no blood stain.

Perhaps these photographs are to be discovered by browsing the texts of William Howard Russell, editor at the British newspaper Times and who did not spare the readers the horror of this war, the black behind the scenes of the destruction of bodies and sometimes appalling conditions? One of the first war correspondents that Fenton portrayed on display here.

The last room is devoted to views of Crimea, Fenton having a strong attraction for the pictorial technique inherited from the landscape painters. He had trained in Paris with the painter Paul Delaroche before learning photography alongside pioneers like Gustave Le Gray, followers of extremely careful composition. A very strong attention, for example, to the light from which flow strange pictures, tinged with a suspended and vaporous atmosphere, such as these large spaces of the Inkermann valley, where stone quarries arise in vigorous presences and make us forget for a moment that nearby humans fight to death.

The origins of war reporting