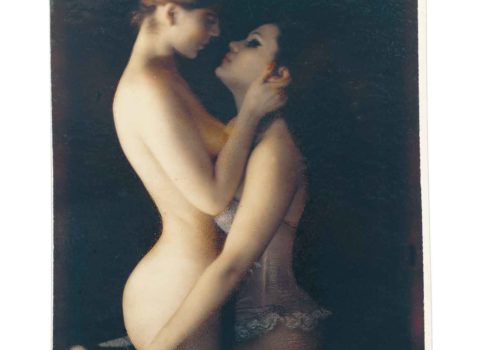 Preview
In a career that spanned more than four decades, Carlo Mollino designed buildings, homes, furniture, cars, aircraft. One of the most dashing figures of mid-century Italy, Mollino was famed for his design finesse and his elegant organicism. In 1949 he published an important book on photography: Message from the darkroom. Sometime around 1960, he began to seek out women—mostly dancers—in his native Turin, inviting them to his villa for late- night modeling sessions. The models would pose against extraordinary backdrops, designed by Mollino, in clothing, wigs and accessories that he had carefully selected. Finally, having printed the Polaroids, Mollino would painstakingly amend them with an extremely fine brush, to attain his idealized vision of the female form. The 1200 pictures remained a secret until after his death, in 1973. Only a few were ever publically shown, until the acclaimed first edition of this volume was published in 2002. Reviewing that book, The New Yorker declared, “This lavish selection of several hundred Polaroids preserves the essential mystery of a project both decadent and hermetic. Though clearly the product of a deep obsession, the photographs are deliberately impersonal, each baroque detail an invitation for the viewer to imagine Mollino’s encounters with the women.” Now back in print, with a newly designed cover, this beautiful volume offers a captivating portrait of a unique erotic sensibility.
The book will be available during Paris Photo.

Carlo Mollino (1905–1973) studied mechanical engineering, art history and architecture before working in the architectural practice of his father, Eugenio Mollino, in Turin. His first architectural masterpiece was the Turin Equestrian Association headquarters (1937). In 1965 he designed Teatro Regio in Turin, which is now regarded as one of his best works. A 1949 Mollino table was sold at auction by Christie’s in 2005 for a staggering $3.8 million. In 1960-68 he designed an enigmatic apartment for himself that today has become the Museo Casa Mollino.