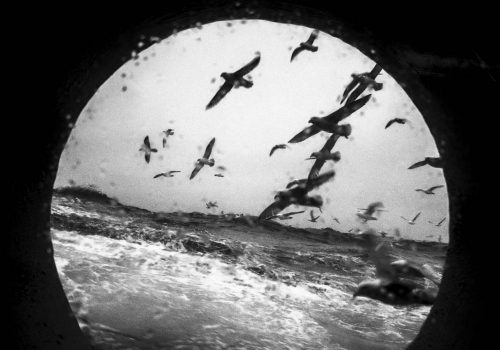 Project produced by photographer and videographer Pierre Vanneste, it offers a poetic and philosophical look at the world of fishing and its environmental and social issues in the Mediterranean and the East Atlantic.

The project was designed to respond to each other in its entirety. Released in August 2020 as a photographic book by Yellow Now Editions, it is linked by Blinkl technology to enhanced content in order to provide access, via the book, to the videos that have been produced. To support the release of this book but also to meet the ambitions of the project, a traveling exhibition with a launch party will be offered in Belgium and France (Zone i – September 2020).

During this launch party at Zone i, a projection of the medium-length film and a live sound performance of the musical composition (soundtrack) of the project on video projection (3 screens of three meters by two) will be offered to the public.

DREMMWEL will be exhibited from September 12 to November 1, 2020.

In January 2015, I started to take an interest in the world of exploitation of fishing resources and the daily lives of those who live off the sea. What relationship does man have with his environment? What are the repercussions on his own existence ? In a globalized society where all choices made in a part of the globe have, by domino effect, an influence on another part, behind the scenes orchestrating the massive exploitation of certain species?

This work aims to compare the different realities between different types of trades, boats, from one region to another, from producer to consumer. Fish species are today the last wild animal resources extracted for production and industrial distribution. In an incessant ballet, those who cause this loss are paradoxically those who depend on it the most. Partitioned mostly in the industrial environment, where the machine and its rhythm dictates the frequency of work, mechanically, the men extract layer after layer what the market concerned about its comfort demands. It is then that with a good conscience, lure of profit, for some, or needs (food dependence), for the others, gradually elude any possible question.

Invisible and yet the current state of the oceans is just as dramatic than that of the forests. Second lung of the earth, their condition allows us to learn more about ourselves, on the state of our society in its relationship to the living . On our ways to produce and consume. From the factory ships from Europe in the north to the canoes of West Africa, passing by the artisans- fishermen from Brittany and the Mediterranean, the existence of the workers of the sea intermingle and merge.

At night, whether with the help of sonar or their gaze, men hunt fishery resource for hours. Overwhelmed by the same depletion of the resources, from north to south, we go further and further, always exerting stronger pressure on certain species prized by the market, straining each time a little more the oceans. Cut by the furrow of the boats and the nets that cross them, the seas are now rippled by human activity. Like a large fresco, this project is meant to evoke the incessant hunting that man does, destroying himself every day a little more.

If DREMMWEL questions the exploitation of fishery resources, it is above all a journey to meet men, machines and living things. An introspective journey, reflection of a society that has forgotten itself, of a species that has gone astray.

After three years of content production and six years of exploration, DREMMWEL comes to an end.

It will be offered in France and Belgium. The first event to launch the exhibition project will take place in France at the cultural space dedicated to Image and Environment, Zone i and will take place on Saturday the 12th of September. A second exhibition will be on display at FOMU (Antwerp Photography Museum) in October and in Brussels in the coming months.

During the exhibition, the viewer is thus invited to browse through the photographic works and installations on offer. A visual and sensory artistic dive into the world of fishing and its environmental and social issues in the Mediterranean and the East Atlantic.

With the doubling of the world’s population since 1960 and the change in eating habits, the amount of fish caught for human consumption has dramatically increased to over 150 million tonnes per year. This represents almost 5,000 kilograms per second. Sixty per cent of this catch is made up of wild fish. According to the Food and Agriculture Organization of the United Nations (FAO), a European today consumes an average of 27 kg of fish per year.

The North-East Atlantic is the fourth largest fishing area in the world. Mainly exploited by European shipowners, this region contributes more than 70% of Community catches.

Carried out between European and African waters, mainly along the Breton and Senegalese coasts, Pierre Vanneste’s “Dremmwel” project is a committed and powerfully documented project about fishing and overfishing, combining sound material (recordings and testimonies in the form of ‘interviews),

Through Blinkl augmented content technology, the book through its images, is the only access to 13 videos and 5 augmented stories.

A documentary project by Pierre Vanneste

With the support of the Wallonia Brussels Federation

image and the National Center for Cinema and Image