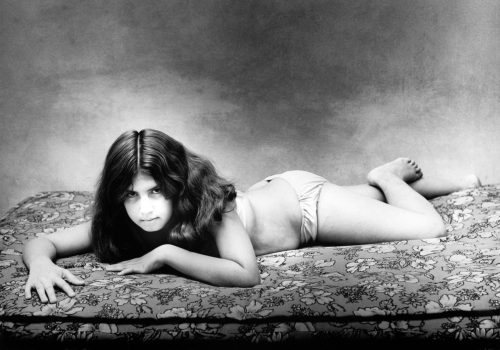 PHotoEspaña’s success is for the most part due to its charismatic director, Claude Bussac, and the selections of its chief curator. After Sergio Mah, it is Cuban Gerardo Mosquera who is, for the next three years, the band-leader for this original festival devoted to photography and visual arts. With art world experience, this man without borders who can neither teach nor publish on his Island home (“I am in exile in my own country”) has provided meaning and sensuality to this 14th edition. Far from dogmatic terrorism, so common in France, and actors in this planetary hip way of life, Mosquera offers a modest and dynamic edition entitled Interfaces. Retrato y communicación. The portrait, key to exchange and communication, between today’s future digital tablet and the sensitive surface of a photo, born in the century when men were at the feet of the Countess of Castiglione.

All is not ideal in this edition, fortunately, as Robert Doisneau, who despised perfection, would have said. There are a few exhibitions, of the 68 in PHE11, 21 of which are official selections, that seem inappropriate or fastidious. Like the labyrinth of Face Contact, whose density provokes disinterest, even Liliana Porter’s cibachromes (Mickey solo), the compact portraits of Madrid’s own Marta Soul or the Chilien Manifeste Pedro Lemebel remain engraved in our memories.

The seeing-well path, like feeling well: be zen, enjoy the show, and take the metro/bus (Tourist Travel Pass), the taxi (ideal at the end of the day). Madrid is Europe’s most welcoming city, yes, that’s how it is. Woody Allen would agree…

Fernell Franco (1942-2006) is at Círculo de Bellas Artes, with his series about prostitutes, presented for the first time in Cali (Colombia) in 1972. They pose openly, with touching innocence; it is not very cheerful, the bordello in general, or this one, rather sordid, situated in the neighborhood of the docks of Buenaventura. A mattress on the ground, for example. But the Colombian photographer understands exuberant girls, in much the same way that Bellocq was, in a more realistic style, hooked on the girls of New Orleans. Proof of his devotion, Franco’s attempts to recompose/decompose these exotic heroines in the dark chamber in the hopes of attracting them, between purgatory and mock Eden.

Upstairs at the same location, Ron Galella, 80 years old, his mother loved Cary Grant, a good sign. Overflowing with energy, he stages an American show, in generally good spirits. Andy Warhol was crazy about this paparazzo, capable of following beautiful people for days straight. Some of them, rightfully so, getting annoyed at this dark shadow. An improvised boxing match with Marlon Brando on a Chinatown sidewalk. A session in laziness and justice with Jackie Kennedy-Onassis. Self satisfaction with John Travolta, already sublime, in 1976, at 22, and around him, wild groupies. It is well known that Helmut Newton loved paparazzo, today they are everywhere, even on museum walls. Too much?

Closer to photographic history is 1000 caras/O caras/ 1 rostro uniting two well known photographers with a mysterious unknown 19th century photographer, American transformer Cindy Sherman and German Thomas Ruff, exemplary of neutrality, and Mexican Frank Montero who had many trades during his lifetime (opera singer, pilgrim, etc.) What is most shocking about this vintage exhibition that stretches beyond apparent mirroring – of which Cindy Sherman is the undisputable champion in the art market – is the combination of these three personalities. As such, this trio, each with his own identity card, like a game of seven families where there is in fact only one, haunted by problems of heritage: food for thought.

Identity problems. Problems with United States History, with Warren Neidich (presented in the OFF), so at ease with truth and fiction that he invents his own archives: dreaming live with Photoshop! “Everything is false, everything is theater” comments this Berlin-based American photographer. “We rent costumes on Broadway, and we create scenes in the New York suburbs”. His exhibition is quite troubling, because it hides nothing, we can see the props and setups… The battle of Chickamauga (1863) that he “reinvents” by shooting it from a plane, like Nadar, in his day, who took pictures from a hot air balloon he borrowed from Jules Verne. Or his ironical homage to Curtis, the photographer of forgotten Indians, that is but a successession of photograms of televised Westerns. “I am a political artist, I try to change the way people think, I am in event culture.”

“Peso y Levedad’s 15 authors don’t shy away from reality. There is no exoticism. Their photography is enlightening.” At the Instituto Cervantes, Laura Terré, co-curator alongside Rosina Cazali, summarizes the exhibition as the “most rewarding” of PHE11. These young photographers were selected last year during Transatlántica, an embracing movement started four years ago in Latin America. Everthing is impressive. The quality of the prints. Their hanging. The incredible force of the testimonies, raw or celestial. From Mayerling García (Nicaragua) to Mauricio Palos (Mexico), Diego Levy (Argentina) Eunice Adorno (Mexico), their images now belong to us.

Finally. In one of the prodigious Matadero workshops is the projection of 48, an eloquent installation by Portuguese Susana de Sousa Dias, built out of a collection of archival pictures from the DGS (political police of the Portuguese dictatorship, 1926-1974). She writes “What does the picture of a face reveal about a political system? What can a picture, taken more than 35 years ago, say about our current situation?”
Later, Gerardo Mosquera sums up this 14th edition of PHotoEspaña in two words : “Provoke thought”.

The 14th edition of PHotoEspaña is taking place throughout Madrid until July 24 (some close earlier, some a bit later). Free entry, except in the Reina Sofia Museum where it is possible to (re)discover masterpieces including Picasso’s Guernica (1937), more relevant than ever.