Photo Independent 2016. Paris Photo L.A. is gone but the little guy across the street survives 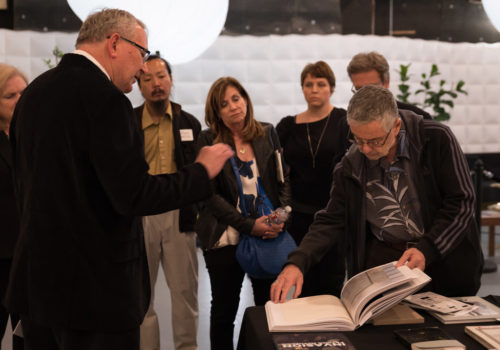 Last year I wrote about Photo Independent as the little guy across the street from the behemoth Paris Photo L.A. This year Paris Photo is gone and Photo Independent showed up again, no worse for wear. The question on many people’s minds was, without Paris Photo bringing in the big names would people still come out for this much smaller show. Based on conversations I had over the weekend the answer was yes. ­Photo Independent represents an evolution of the market for photographers and photo fairs, a show of individuals and small groups, not galleries. The math is clear if a little daunting. You put your money down for prints and framing, get your pictures to the venue and pay for hotels and living. You keep all the proceeds…if there are any. This year over one hundred photographers and about half that many book publishers took the bet. The opportunity to show your work to a sophisticated audience, gather feedback, look for attention from gallerists and maybe sell enough to pay your way or make a few dollars seemed like a good deal and for many it was.

Photo Independent does a good job bringing in photography lovers and getting exposure for the artists who are showing. This year there were curated walkthroughs, seminars, demonstrations and artist talks as well as a glam Friday night opening calculated to bring out the young and the beautiful.

Full disclosure, I led one of the walkthroughs this year and preparing for it helped me form my thoughts about the show and this moments state of photography – it was great fun to introduce a crowd of people to photographers and photographs from virtually every school we are currently enjoying.

The first place we stopped was the demo area of Luther Gerlach, a leading practitioner of historical photographic processes. On display were a handful of the hundreds of large format cameras he owns as well as the very large contact prints he makes using them. Our last stop was at the booth of documentary photojournalist Sara Terry where we looked at her tiny, tiny prints made with an Ericsson P910 smartphone she used in her work as early as 2006. In between there were images made partly in the studio and partly from the street by Ole Joergensen, large prints from tiny sculptures by J.T. Burke, Platinum prints by E.F. Kitchen, an Instagram conversation by F8 – a Chicago collective, books to see, studio images, street photography, portraits, film, digital, mixtures of the both…and more. Easily a full day or two especially if you stopped to hear a few of the presentations.

My takeaway, photography is rich and healthy with venerable traditions hanging on the walls right next to the modern and the experimental. Photographers remain committed to producing fresh and interesting work in the face of the billion indifferent instagrams and willing to put their money, labor and vision on the line to show the world how they see it. I’m looking forward to what next year’s show will bring.