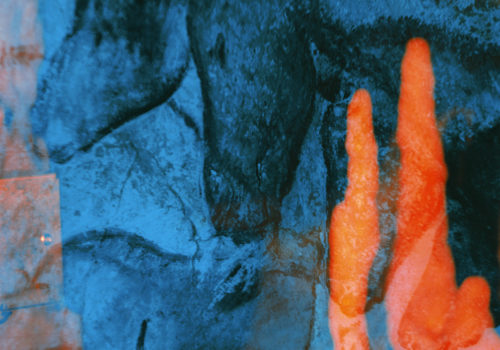 In a highly hallucinogenic photographic journey, the artist explores the mythical lair of prehistory in France, the cave of Chauvet-Pont d´Arc, and reveals some of its supernatural bark.

When this cavity adorned with extraordinary wall paintings was discovered in 1994, the three researchers, including Mr. Chauvet, immediately understood that it could never be opened as it was to the public. The lesson of what happened in Lascaux was remembered. A replica has emerged nearby that now received hundreds of thousands of visitors a year, the authentic cave is only accessible to a handful of elected officials: researchers, artists, writers. Thus, they are the only ones able to smell the singular air of the cave of Chauvet-Pont d’Arc, a place where so many humans have passed at the dawn of humanity, standing next to the large herds they were hunting.

The Association in charge of the cave to distribute informations and attract visitors and researchers, the Ministry of Culture and the region, in a desire to open the places to artists and this time for a work placed under the “sign of youth”, chose the photographer Philippe Durand. Produced between February and April 2018, his series has just been published in a book published by RVB (L’aventure interne) and has been exhibited at the Laurent Godin gallery (September 2021). In all four two-hour sessions, the maximum time allowed in the cave so as not to damage it, in order to capture an impression of a 21st century human being confronted with this distant and obscure territory, of which we know almost nothing.

Thus Philippe Durand had the idea of ​​following the trail of shamanism, so often evoked in connection with the inhabitants of Prehistory by noticing that the latter seemed to practice powerful rituals in which parietal painting could act as a magical revealer and with in Chauvet, this strange space covered with bear skulls. Equipped with a strong flash and six color filters (red, green, blue, yellow, purple, orange), the photographer offers a visual stroll with acidulous effects in the pure vein of the psychedelic iconography of the 1970s.

These colored fragments, however, deliver more than the author’s only illuminated promenade. They make it possible to identify here or there a drawing, a shape or a depth in the cavity which then triggers a feeling of vertigo as well as a total fascination in front of the work of so distant human fellows.

These circles in red ocher like dried blood are mysteries, this silhouette of an ibex traced in soot, this crucified cross that suddenly appears and resembles that of Golgotha.

Far from revealing all the undersides of the charm that these features of the depths operate, the work of Philippe Durand makes it possible to feel them very close.