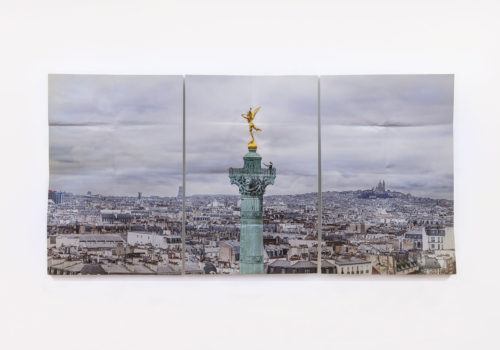 Perrotin Tokyo presents a solo exhibition of JR’s work, new or never seen before. Consisting of early iterations of his Unframed series, dating back to 2012, as well as brand-new works created in his home city of Paris during the pandemic, the artist revisits his roots throughout this show.

Much of JR’s work deals with people whose stories would not be told otherwise — people whose lives are often obscured or hidden, by exhibiting their photographic likenesses on a monumental scale. With a similar relationship to architecture, inaccessible spaces and famous, over-photographed locations succeed in finding new language through JR’s lens. Inspired by the iconic photograph, The Lovers of the Bastille (1957) by Willy Ronis, he hoped to recreate the image for the present day. JR’s reinterpretation depicts a couple, ballerinas both, floating in an embrace at the summit of Paris. These photographs were taken early 2021, a time when Paris, as indeed every other city, was cut off from the rest of the world. Taken from the vantage point of the roof of the Opera Bastille, these works give us a glimpse of the Paris skyline — but of a particular view that has been obscured from the public since the closure of the national monument in 1985. JR’s first visit to the top of the column brought him face-to-face with vestiges of another time — graffiti left behind from original visitors to the top of the tower, dating back to the 19th century. Furthering this project and echoing some of the artist’s earlier series with dancers, JR revisited the Louvre Museum’s roof during the seven months, along with all the other museums in Paris, were closed to the public. The ballerina, restfully positioned on the building’s roof, acts as a quiet reminder of the semiotics of space.

For his on-going series Unframed, JR finds archival photographs that he often blows up to larger-than-life proportions, which he then pastes in architecturally diverse locations. This particular iteration, inspired from photographs taken by press photographer Watabe Yukichi, took place in 2012, while JR traveled throughout Japan, and interlaced these photographs, which infer historical situations, pasted on abandoned buildings in Matsuo and obscure outcroppings of rock, across mining towns long forgotten. Rather than replacing the photographs on the site they were taken, JR looks to create new stories, crossing the paths of the archival photographs and their new, often impenetrable location, places that may remain with their pastings untouched for years to come. These abandoned locales carry their own weighted histories, ghost towns with their own stories to tell. In recontextualizing these architectural sites, JR opens up a dialogue between the past and the present, nudging the viewer to contemplate the ever-changing layers of history that comprise our cities, within the realm of public spaces and private spheres.